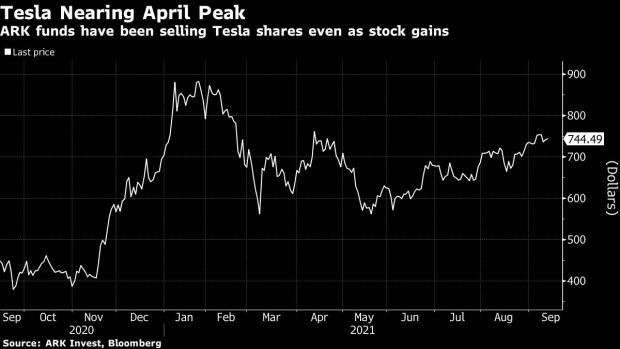 Ark Investment Management LLC funds sold almost 89,000 shares in Tesla and added more than 236,000 of Robinhood, according to the firm’s daily trading update. They’ve added about 390,000 Robinhood shares so far this month.

Shares in the online brokerage, which became a household name as cooped-up users bet on assets like meme stocks and cryptocurrencies, have fallen 43% from their peak in early August. Ark is the company’s fifth-largest stockholder with just under 1% of the shares.

Ark funds have sold more than a million Tesla shares in the past five months, offloading $200 million this month alone. Still, the Elon Musk-led company is their biggest holding, worth more than $4 billion based on Tuesday’s closing price, according to data compiled by Bloomberg.

Ark’s strategy regularly involves selling some of its winners to invest in other targets. Its stake in Tesla has surged in value in recent months, with shares of the carmaker up 32% from their 2021 low, set in March.

Wood predicted in March that Tesla’s stock would hit $3,000 by 2025, putting its valuation at about $3 trillion. Its current market capitalization is about $746 billion.

Ark’s other trades on Tuesday include buying more of Zoom Video Communications Inc. and Signify Health Inc. and cutting back on LendingClub Corp., Bristol-Myers Squibb Co. and Nintendo Co.

Ark’s daily trading update reflects portfolio changes made by its investment team and excludes creation and redemption activity and public offerings; for this reason it may not fully reflect all of the firm’s trades.