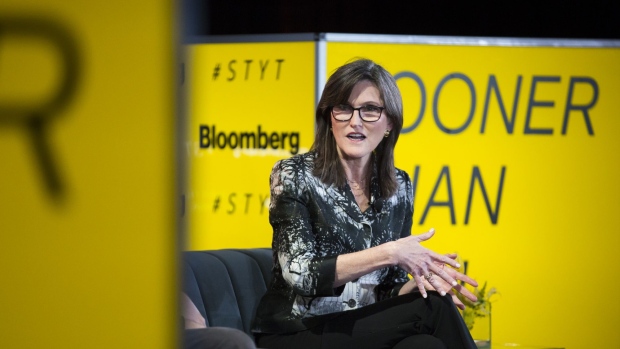 (Bloomberg) -- Cathie Wood would sell Tesla Inc. if its price hit her five-year target in the coming year.

The electric-vehicle maker’s stock is now roughly $750 and her base price target in five years is $3,000, she said. “If nothing were to change in our outlook and we got to $3,000 next year, my guess is that we would be peeling out of it,” she said.

The head of Ark Investment Management was speaking at a news briefing following a panel at the Morningstar Investment Conference Wednesday. At the session, she debated veteran investor Rob Arnott, who has been skeptical of high valuation growth stocks like Tesla.

Arnott, the chairman of Research Affiliates, asked Wood how investment managers should decide when to get out of positions.

Wood’s answer on selling Tesla came during the press briefing, when his question was repeated. But during the panel, she defended her famous Tesla bet.

Along with listing some of the advantages of electric vehicles -- including that she hasn’t had to go to a gas station since September 2018 -- she cited the price drops in battery pack systems.

It’s been a dramatic year for Wood after her firm’s exchange-traded funds beat most of the U.S. market last year. Her flagship Innovation ETF (ticker ARKK) is down 5% this year after returning nearly 150% last year.

Wood continued to advocate for her bets on disruptive technology and said she expects a 30% compound annual rate of return for her flagship strategy. She also said that she did not think that the market was in a bubble.

Ark’s funds have offloaded some Tesla stock this month, after shares of the company rallied. Still, the electric-vehicle maker is their biggest holding, according to data compiled by Bloomberg. Ark’s strategy regularly involves selling some of its winners to invest in other targets.

Also during the news briefing, Arnott was asked about what will happen with China Evergrande Group. He said that he has lost six basis points on his investment in the property developer, but expected that Beijing would “ring-fence” the firm to limits its economic fallout.