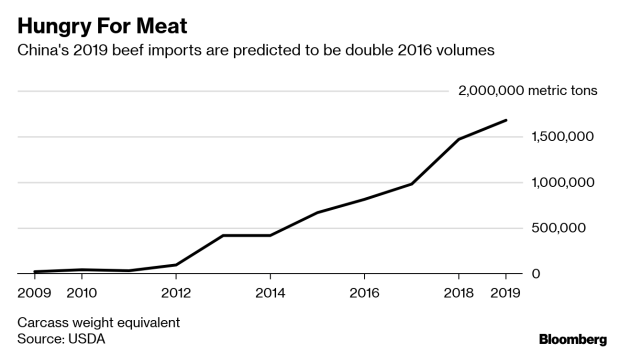 (Bloomberg) -- Scott de Bruin’s Wagyu cattle ranch and China might be 4,500 miles apart, but the Australian beef producer has seldom been better connected to his biggest market.

Orders for de Bruin’s luxuriously fatty steaks from Chinese customers, which include the Nest in Shanghai’s historic Puxi district and Beijing’s Park Hyatt, jumped 50% in May from the year before, he said. Sales have been buoyed by the outbreak of African swine fever in the world’s biggest hog-growing country that started last year. It’s pushed up pork prices and boosted demand for alternative meats.

While China’s pig supplies tumble in the wake of the contagious swine epidemic, its imports of pork, beef, seafood, poultry and sheep meat from suppliers from Brazil to New Zealand are booming. Beef imports eclipsed 1 million metric tons last year, making China the world’s largest market; it was already the world’s top destination for mutton and lamb.

The disease, which isn’t known to harm humans, is predicted to slash China’s pig supply by 20-30% this year and lead to pig-meat shortages.

“African swine fever will be the biggest influence on global meat markets possibly for the next few years, if not possibly the decade,” Tim Ryan, a Singapore-based market analyst with trade group Meat & Livestock Australia, said in a phone interview. “I don’t think there’s going to be enough meat around the world available to actually fill the gap.”

Pork imports -- which mostly come from the European Union, Canada and Brazil -- may surge 40% to 1.7 million tons this year, before increasing to 2.1 million tons in 2020, the China Daily newspaper reported last month, citing a report from the Ministry of Agriculture and Rural Affairs in Beijing.

Brazil’s pork exports to China may climb 61% to 250,000 tons this year, Adolfo Fontes, an analyst at Rabobank, said this month.

“I have made multiple trips to China over the last few months in order to better understand the impact of African swine fever,” Bendheim said. “The impact on the worldwide protein markets of the loss of 200 million-plus pigs in China is just beginning to be understood.”

The drop in meat supply is the largest “in recent memory,” Gregory A. Heckman, CEO of Bunge Ltd., a White Plains, New York-based agricultural trading house, told analysts on its earnings call earlier this month. “The decline is equal to the entire U.S. swine herd and the full impact of this disease remains to be seen.”

Imported pork and poultry will be the most popular substitutes for locally produced pig meat, said Don Mackay, chairman of the Red Meat Advisory Council, an Australian industry group, and a former CEO of rancher Australian Agricultural Co.

The cost of premium Australian beef, which may be five or six times as expensive as pork, will limit its demand in China, Meat & Livestock Australia’s Tim Ryan said.

Retail prices for beef averaged 65.14 yuan a kilogram last year, according to China’s Agricultural and Rural Animal Husbandry and Veterinary Bureau. That compares with 19.19 yuan/kg for chicken, 22.47 yuan/kg for pork and sheepmeat at 62.34 yuan/kg.

Sales of Australian beef to China jumped 66% to 72,460 tons in the first four months of 2019, while Brazilian shipments have risen 14% to 95,700 tons. China’s total imports have increased an average of almost 90% a year since 2009, driven by rising demand from middle-class consumers, and have accelerated since the first cases of African swine fever were reported last August.

“It’s huge,” said David Blackmore, who produces Wagyu beef in Australia’s Victoria state for upscale restaurants in Australia, China and 13 other overseas countries. “We ain’t seen nothing yet from a world point of view.”

Wagyu is the Japanese beef breed renowned for producing ultra-high levels of intramuscular fat, or marbling. Japan has been banned from exporting beef to China since 2001, when the first Japanese case of mad cow disease was detected.

China has emerged as a major buyer of lower-quality cuts of Australian beef, including forequarters and trimmings. Blackmore recently doubled the price for lesser cuts and still “can’t keep up” with demand, he said.

--With assistance from Tatiana Freitas.

To contact the editors responsible for this story: Adam Majendie at adammajendie@bloomberg.net, ;Anna Kitanaka at akitanaka@bloomberg.net, Andrew Hobbs, James Poole