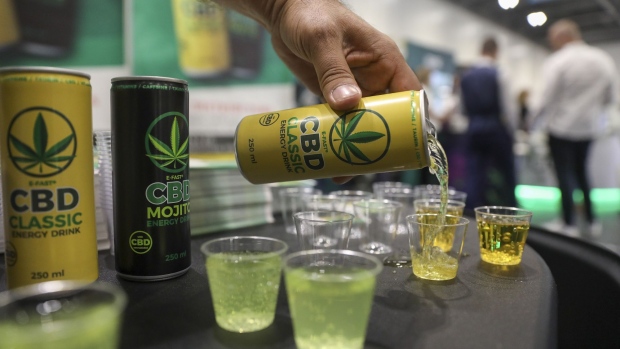 A can of E-fast energy drink is poured at the CBD Hive stand at the Europe CBD Expo at the Excel in London, U.K., on Friday, Jul. 12, 2019. U.K. investors eager for a piece of the cannabis market are being deterred by a broad, catch-all law on proceeds from criminal activities. , Bloomberg

CBD wholesalers should “have big concerns” about the U.S. Food and Drug Administration’s growing unease about the safety of the cannabis compound, according to one chief executive officer.

The FDA said Monday that it “cannot conclude that CBD is generally recognized as safe among qualified experts for its use in human or animal food.”

It added that “some of the available data raise serious concerns about potential harm from CBD,” including liver injury, drowsiness, diarrhea and changes in mood, and raised questions about its impact on children and pregnant or breastfeeding women.

This could cause big retailers to shy away from products containing cannabidiol, a non-intoxicating compound found in the cannabis plant, said Peter Horvath, CEO of Green Growth Brands Inc.

“It could be that this FDA thing causes the chains to either cut back or discontinue their CBD businesses,” Horvath said in a phone interview Tuesday. “I think if you’re in a strictly wholesale strategy and if you sell ingestibles, you’d have to have big concerns.”

Consumer CBD stocks fell on the news, with CV Sciences Inc. down as much as 13 per cent. Charlotte’s Web Holdings Inc. lost 6.6 per cent and CbdMD Inc. slid 11 per cent.

The FDA’s statement “used an inappropriately alarmist tone,” Duffy MacKay, CV Sciences’ senior vice president of scientific and regulatory affairs, said in an emailed statement. “There are more direct ways for the FDA to address bad actors while still working with responsible companies to establish the appropriate scope of hemp-derived ingredients for supplements based on sound research.”

Bullish forecasts on CBD’s sales potential are likely to be slashed in the wake of the FDA’s “very cautious tone,” according to Jefferies analyst Owen Bennett, whose own model calls for retail sales of just US$3.5 billion in 2022.

The agency hasn’t made a final decision about how to regulate cannabidiol, which is a non-intoxicating compound found in the cannabis plant, but Monday’s statement indicates its approach is likely to be stringent, Bennett said.

“The safety risks as well as the spike in consumer interest will likely see heavy regulation (especially against the backdrop of the recent vapor deaths, an area where the FDA has arguably dropped the ball on regulation), with companies having to support product launches with detailed reports likely including clinical studies,” he said.