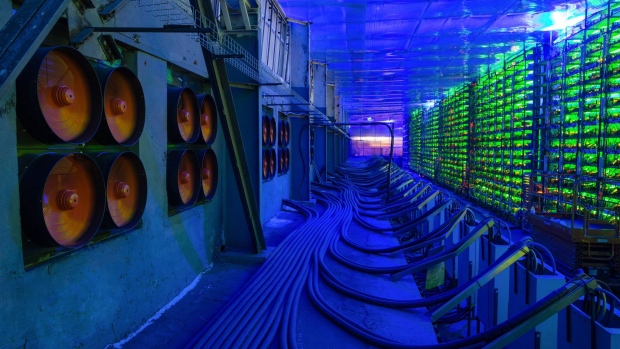 Industrial cooling fans operate to thermally regulate illuminated mining rigs at the CryptoUniverse cryptocurrency mining farm in Nadvoitsy, Russia, on Thursday, March 18, 2021. The rise of Bitcoin and other cryptocurrencies has prompted the greatest push yet among central banks to develop their own digital currencies. Photographer: Andrey Rudakov/Bloomberg , Bloomberg

(Bloomberg) -- Cboe Global Markets Inc. is looking to get further back into the cryptocurrency space after a couple of ill-fated attempts in prior years.

The Chicago-based exchange holding company ceased Bitcoin futures a couple of years ago and has made several as-yet-unsuccessful attempts to list a Bitcoin exchange-traded vehicle. But it entered the crypto market-data business in December in a pact with CoinRoutes Inc. And it’s eyeing new efforts as the market matures and demand for products increases, Chief Executive Officer Ed Tilly said in a phone interview.

“We’re still interested in the space, we haven’t given up on it,” Tilly said of Bitcoin futures. “We’re keen on building out the entire platform. There’s a lot of demand from retail and institutions, and we need to be there.”

Interest in cryptocurrencies has skyrocketed in the past year, with more institutions beginning to adopt the token. Elon Musk announced yesterday that Tesla Inc. would now take Bitcoin as payment for its vehicles, while Fidelity Investments became the latest firm to apply to list a Bitcoin exchange-traded fund in the U.S. But there is still plenty of caution, evidenced by Nordea Bank Abp’s CEO saying Bitcoin is too risky to touch unless it’s regulated.

Cboe was the first U.S. exchange to list Bitcoin futures after announcing them in late 2017, but it was followed closely by CME Group Inc. -- and the latter’s products soon gained wider acceptance. In June 2019, Cboe let its last Bitcoin futures contract settle.

“We’re very keen to move along approval for the VanEck ETF,” Tilly said.