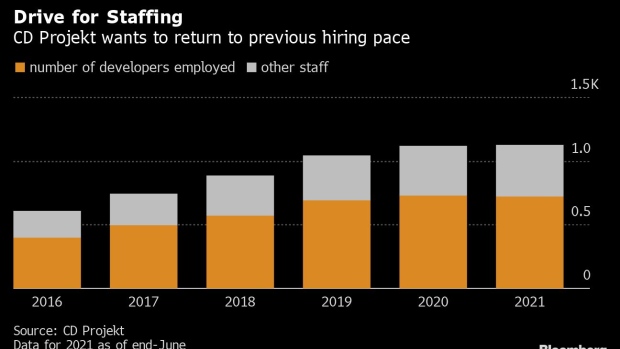 Marketed as a role-playing game that pushes the boundaries of the industry, Cyberpunk was released with so many glitches that Sony Group Corp. for months removed the title from its PlayStation Store. The studio’s shares tumbled as the debacle shone an unfavorable light on CD Projekt’s work culture with reports of bad planning, burnouts among staff and high-profile defections.

Kicinski insists those days are now gone. He wants to increase the number of employees by an average of 20% a year, restoring the pace of hiring from before the pandemic. CD Projekt is also switching to the so-called agile workflow model in game development and expects to see the results at the turn of this year.

“The retrospection of the project that didn’t go exactly as planned has triggered a strong motivation for change,” Kicinski told Bloomberg from CD Projekt’s headquarters in Warsaw, which features yoga classes, Indian-food canteen and dog walks.

About 100 out 1,124 staff already use the agile method, which splits game development process into smaller, flexible cycles and involves customers for feedback, he added.

CD Projekt’s hirings slowed to 7% last year when many of its employees were forced to work remotely. The new work-from-home regime was one factor behind Cyberpunk’s bungled release that was eventually delayed three times, according to Kicinski. The company lost 10 developers in the first half of the year, shrinking a workforce that already trailed competitors including Ubisoft Entertainment SA and Rockstar Games.

Kicinski said CD Projekt is facing “challenges” as some people still want to work remotely and new hires are often reluctant to relocate to Poland. Only about third of its staff decided to return to the office, which isn’t mandatory until the end of the year.

Meanwhile, Vancouver-based Digital Scapes studio, which the company bought in March as its “first foreign outpost,” could eventually grow to as many as 100 employees from over a dozen, Kicinski said. CD Projekt, which has 1.1 billion zloty ($288 million) of free cash, isn’t interested in buying smaller Polish studios just to boost earnings, he added.

Cyberpunk has been a humbling experience for the company, whose big break came with the release of The Witcher 3: Wild Hunt medieval role-playing game five years ago. CD Projekt doesn’t want to over-promise for its next release.

While Kicinski is “cautiously satisfied” with first result of changes in the organization, he didn’t want to confirm that a Cyberpunk version optimized for next generation consoles slated for later this year will arrive on time -- a major focus for investors seeking an inflection point.

“I deeply believe that the game’s perception may significantly improve in the future,” he said, adding he doesn’t expect a “wow effect” but rather a “gradual rebuilding of sales.”

Shares in Warsaw-traded CD Projekt lost as much as 62% of their value as a result of Cyberpunk troubles, triggering lawsuits from U.S. holders of it depository receipts. Kicinski called the lawsuits “strange” as the company didn’t approve or benefit from the sale of securities offered by U.S. investment banks. He vowed to fight them.

“We do games and may seem like a jazz-and-rock bunch,” Kicinski said. “But we do take formal issues very seriously.”