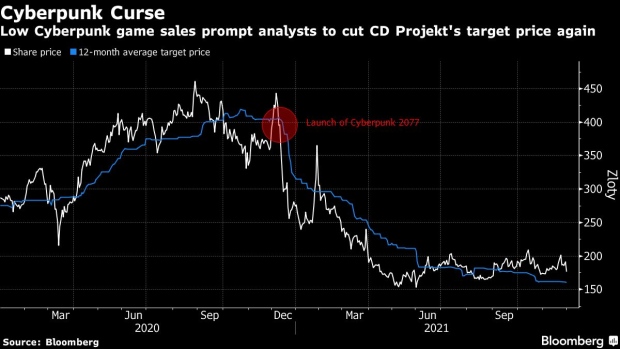 Copies of the Cyberpunk 2077 computer game, produced by CD Projekt SA, beside a PlayStation 4 (PS4) console in a video games store in Paris, France, on Thursday, June 17, 2021. The reinstatement of Cyberpunk 2077 to the PlayStation store will help CD Projekt SA with the marketing of games series but may not make much of a difference for its bottom line until a new version of the futuristic role-playing game is ready, according to BOS Bank SA analyst Tomasz Rodak. Photographer: Cyril Marcilhacy/Bloomberg , Bloomberg

The game studio’s shares fell as much as 8.5% after it reported third-quarter revenue of 144.5 million zloty ($35.1 million), missing the lowest analyst estimate in Bloomberg’s consensus. Today’s drop added to this year’s slump of more than 35%, amid a tumultuous year in which the firm’s much-anticipated Cyberpunk 2077 game launch was tarnished by multiple bugs.

The company has not yet given an update on the number of copies of the game it has sold, and said late on Monday that it is now offering its biggest title with large rebates to “bring back sentiment” for the franchise. The studio said it’s “on track” with plans for a new version of Cyberpunk for next-generation consoles in the first quarter of 2022.

Analysts at Credit Suisse AG and Barclays Plc, who both have a sell-equivalent rating on the stock, cut their price targets after the results. Credit Suisse’s Matthew Walker said that CD Projekt’s game pricing power “looks increasingly questionable,” while Barclays analyst Nick Dempsey said that the market underestimated the drop-off in Cyberpunk sales after a boost from the return to Sony Corp.’s Playstation store in June.

Despite the slump for the shares this year, analysts see more downside, with the average price target among those tracked by Bloomberg suggesting a further drop of almost 10%.