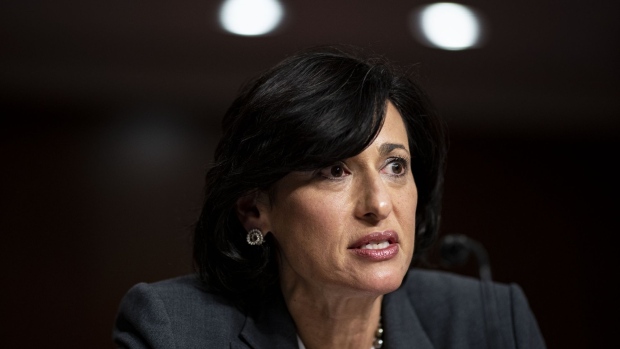 Rochelle Walensky, director of the U.S. Centers for Disease Control and Prevention (CDC), speaks during a Senate Health, Education, Labor, and Pensions Committee hearing in Washington, D.C., U.S., on Thursday, Nov. 4, 2021. Younger children across the U.S. are now eligible to receive Pfizer's Covid-19 vaccine, after the head of the Centers for Disease Control and Prevention this week granted the final clearance needed for shots to begin. , Bloomberg

The Centers for Disease Control and Prevention director is establishing an Office of Public Health Data, Surveillance and Technology aimed at closing up crucial gaps in monitoring for potential threats, according to a person familiar with the developments. Walensky is also forming an Office of Health Equity that will report to her team, according to the person, who asked not to be named discussing details that aren’t public.

More of the agency’s units will report directly to the director’s office, increasing Walensky’s view of the nation’s health status. Details of the changes were announced at an in-person town hall Tuesday at the CDC’s headquarters in Atlanta and broadcast to staff around the world, the person said.

The organizational shake-up was guided by a monthslong internal review that identified cultural and organizational shortcomings in the agency’s response to the pandemic. Walensky’s advisers determined that CDC needed to share scientific findings and data faster, improve communications, strengthen relationships with federal, state and local partners, and ensure that the public-health workforce responds quickly to emergencies.

Bloomberg News previously reported other developments in Walensky’s CDC Moving Forward project, including the creation of a new division dedicated to the coronavirus and other respiratory viruses within the National Center for Immunization and Respiratory Diseases, and a new mandate that all employees be ready to deploy to combat national health crises.