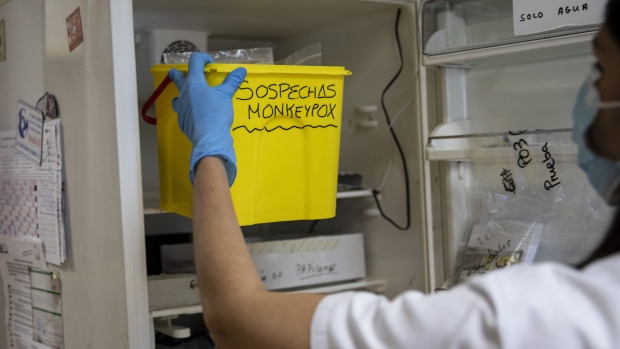 (Bloomberg) -- US health officials are looking to expand use of the monkeypox vaccine for children as the outbreak continues to spread across the US and in countries around the world, with more than 3,300 cases reported globally.

The US Centers for Disease Control and Prevention is developing a protocol aimed at allowing use of Bavarian Nordic A/S’s Jynneos vaccine in children, if needed, according to documents prepared for a meeting of agency advisers that took place this week. The vaccine is currently cleared for use in adults and is considered safer than Emergent BioSolutions Inc.’s ACAM2000 smallpox vaccine, which can also be used against monkeypox.

The current monkeypox outbreak has mainly been seen among men who have sex with men, but concern about other populations is growing as infections increase in the US and 44 other countries. Domestic spread is increasing, with almost half of infections acquired locally rather than linked to travel abroad, according to the CDC documents. Monkeypox is spread through intimate contact with someone that’s contagious, such as touching infectious sores, as well sharing materials such as clothes or bed sheets.

The Department of Health and Human Services said Wednesday it would expand monkeypox testing to five of the country’s largest commercial labs in order to better monitor its spread after experts warned the US wasn’t doing enough to determine how widespread the outbreak actually is. The department also said it’s helping support hospitals that want to develop high-quality tests for monkeypox.

The CDC says there are currently 36,000 courses of Bavarian Nordic’s Jynneos vaccine in the Strategic National Stockpile and the agency expects approximately 500,000 courses to be delivered this year. The US government could procure about 7.9 million courses from Bavarian if needed.

Jynneos is administered in two shots, spaced four weeks apart. The CDC has already sent vaccines to states with monkeypox cases and New York City’s health department said Thursday that it would offer inoculations to eligible people at a temporary clinic.

CDC documents also show the agency plans to conduct a study to see how much of the US has had a previous monkeypox infection by looking for antibodies. The agency will prioritize genomic sequencing, which would help understand if mutations are playing a role in this current outbreak.

“We’re sequencing all specimens that we can get our hands on,” Gregory Armstrong, director of the CDC’s Office of Advanced Molecular Detection within the National Center for Emerging and Zoonotic Diseases, said in an interview. Thus far, the CDC is getting specimens from public health labs, he said.

“All the evidence so far suggests the virus is behaving as we anticipated,” he said. “It’s much more stable than most viruses, and we don’t anticipate that it’s going to be mutating at the rate of SARS-CoV-2.”