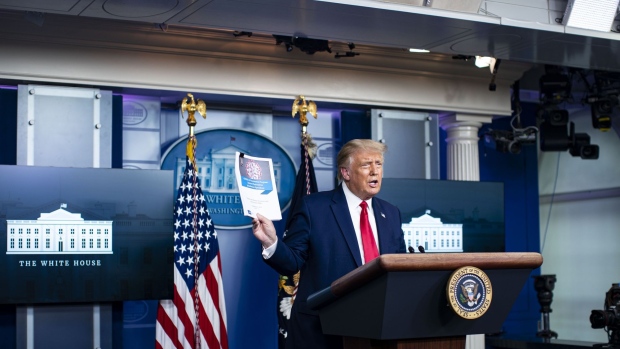 (Bloomberg) -- A few months ago the Trump administration put in place new procedures to review Centers for Disease Control and Prevention guidelines related to Covid-19, subjecting hundreds of proposed documents and publications to questioning by officials across the administration, according to people familiar with the matter.

Since then, officials from across the government have been weighing in on almost every document or website related to Covid-19 advice that the agency has published, the people said. The full extent of the role other federal agencies are playing in shaping CDC recommendations hasn’t been previously reported.

While the additional scrutiny rarely resulted in major changes to the CDC’s publications, the people said, it delayed guidance to nursing homes, schools, houses of worship and businesses, sometimes for weeks, as infections soared across the U.S.

The extended protocol required the CDC to clear all of its coronavirus recommendations with White House officials and eventually other agencies, adding layers of bureaucratic procedure and slowing the agency down, said the people, who asked not to be identified discussing matters that aren’t public.

A senior administration official said such reviews were standard before the pandemic and they ensured that agencies across the executive branch were coordinated. Reviews of important CDC guidance were expedited, not delayed, the official said.

However, the people who described the new procedures said prior to Covid-19, scrutiny wasn’t applied to information such as health guidance posted to the CDC’s website. As the pandemic escalated, the number of stakeholders the CDC had to consult with before publishing guidance increased, the people said.

“The White House Coronavirus Task Force, at the direction of the President, made it a priority to ensure that any and all communication and guidelines presented to the American people with regard to this new novel virus from China were fully reviewed, studied, and vetted by administration officials, including the top medical doctors, for accuracy, effectiveness, and safety to protect the public health—a process the White House stands by that saved lives,” White House spokesman Judd Deere said in an email.

In a statement, CDC Director Robert Redfield said, “we continue to be grateful for OMB’s OIRA important role in the review process because, quite frankly, it leads to better guidance,” he said, referring to the White House Office of Management and Budget’s regulatory review division, the Office of Information and Regulatory Affairs. “This is an all of government response that requires review, input and discussion among federal partners involved in responding to this pandemic.”

In the early stages of the pandemic, CDC would clear guidance with its parent agency, the Department of Health and Human Services. Later, it also cleared materials for publication with the White House Coronavirus Task Force. By late spring and early summer, OMB was reviewing guidance and circulating it to other parts of the government, including officials with no public health or scientific expertise, for comments and questions for CDC staff to respond to, the people said. Each layer of additional review added to the time it took to publish guidance, the people said.

An OMB spokeswoman said in an email that the office reviewed such documents before Covid.

Recent media reports indicated that Trump administration officials tried to interfere with the CDC’s scientific publications. A controversial guideline recommending that people exposed to Covid-19 shouldn’t necessarily be tested was published over the agency’s objections, The New York Times reported Thursday, citing documents and people familiar with the situation. The CDC published new guidance reversing those recommendations on Friday.

Rifts between President Donald Trump and the CDC, long considered the world’s premier public-health agency, are increasingly in public view. Redfield told a Senate panel this week that a coronavirus vaccine wouldn’t be widely available to Americans until the middle of 2021, contradicting Trump’s predictions that a shot would arrive this fall. Trump said in a news conference later that he had called Redfield after the appearance and said the CDC director was confused and misunderstood the question.

The process for getting CDC guidance cleared through the administration has frustrated agency officials for months, the people said. They described it as chaotic at points, with a rotating set of outside agencies and officials sending multiple rounds of comments without consistent protocols for getting documents approved and sometimes no clear sense of who was in charge.

Authorities involved in the reviews included the White House Coronavirus Task Force, OMB and OIRA, the Department of Homeland Security, the Labor Department, the State Department and the Department of Education, among others, as well as CDC’s parent organization, the Health and Human Services Department.

One person said the outside perspective was sometimes helpful, but it slowed down publication. For example, guidance for nursing homes went through at least 10 rounds of review, delaying it for several weeks.

In mid-May, as some states were beginning to ease their lockdowns, officials from OMB suggested the CDC modify language in proposed documents about reopening restaurants, according to an email seen by Bloomberg News and a person familiar with the situation.

OMB’s proposed language omitted the phrase “encourage social distancing” while maintaining other safety suggestions, including that restaurants “enhance spacing” and promote drive-through, delivery, and capacity limits. The OMB officials were concerned that including the language about social distancing could expose restaurants to legal risks, a person familiar with the matter said.

The CDC rejected the proposed change. The documents for restaurants and workplaces that it published at the time included the advice that establishments “encourage social distancing,” along with the other safety measures. The phrase “social distancing” was linked to another CDC page advising people to stay six feet apart and avoid large gatherings, instructions that had been central to the government’s coronavirus response for weeks.

An administration official said OMB agreed with CDC’s suggestion that maintaining distance between diners was important, even if the precise language it suggested differed.

Such guidelines are a linchpin of the CDC’s response to the virus, and the agency’s advice is sought after by the public. The CDC said coronavirus information has been viewed on its websites more than 1.7 billion times and its social-media posts on the outbreak have had 2.4 billion impressions. The CDC’s regular briefings for media on Covid-19 were suspended in March as the agency increasingly took a back seat to other administration leaders. Online publications are a primary way for the agency to get its message out.

The CDC’s guidelines cover everything from how hospitals should deal with shortages of protective gear to how schools should reopen. Its recommendations aren’t generally binding, but they set standards that state and local health officials may follow or adapt to the circumstances of their jurisdictions.

A spokeswoman for HHS said policy reviews from health agencies and the Task Force are part of normal procedure. "This is to ensure that during a pandemic, we can swiftly and effectively communicate public health policies to healthcare experts and the American people," she said.