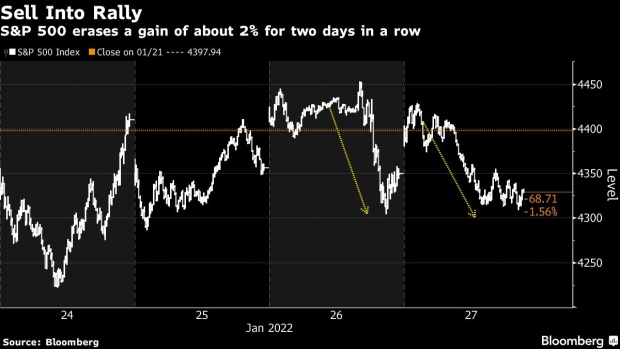 (Bloomberg) -- Jerome Powell says the Federal Reserve will be nimble in formulating monetary policy. The stock market is running itself ragged trying to figure out where it will land.

Twice in two days, S&P 500 has erased a gains of roughly 2% to close the session lower. Such a streak of big back-to-back downside reversals has occurred only once before in Bloomberg’s four decades’ worth of data: October 2008. Equally big swings rocked the market on Monday and Tuesday.

Day-to-day volatility is turning brutal as traders struggle to price in growing hawkishness at the Federal Reserve. Powell on Wednesday said the economy is strong enough to take a flexible approach to monetary policy going forward, a statement markets viewed as leaving the door open to a faster schedule of rate hikes.

“We’re finally starting to adjust to the reality of a new policy regime. The new regime is that we have well above-trend inflation and the Fed is between a rock and a hard place,” said Peter Cecchini, director of research at Axonic Capital LLC. “The markets are very oversold. That doesn’t change what I think is a sell-the-rally market.”

Stocks started Thursday in the green amid better-than-expected data on economic growth, then U-turned at midday. The Nasdaq 100 wiped out a 1.7% advance as tech megacaps like Tesla Inc. and Intel Corp. extended declines after reporting earnings. Apple Inc. fell for an eighth straight day ahead of releasing its quarterly results. On Wednesday, the S&P 500 gave up a gain of 2% after Powell stuck a hawkish tone.

“To be honest I was surprised it was higher earlier,” said Sarah Hunt, portfolio manager for Alpine Woods Capital Investors. “The good GDP numbers may be a sign that good news is now bad news, as it gives the Fed more room to raise more quickly.”

Some market watchers blamed the equity jitters on a flattening yield curve that signals investor concern over the economy’s long-term outlook. With the odds rising that Powell might front-load hikes by potentially making a rare 50-basis-point move in March, that prospect prompted a spike in 2-year Treasury yields and a decline in 10-year yields.

Others say the impetus to sell suggested a growing unease among investors, particularly professionals who are off to a poor start in 2022. Stock pickers failed to ride the January revival in value shares and struggled to cut exposure to growth companies fast enough when tech shares were caught at the center of the rate-fueled selloff. And with January winding down, many funds are now in a survival mode.

“Approaching Monday’s month end, it seems investors are not sure whether this is the beginning, middle, or end of the selloff,” said Larry Weiss, head of equity trading at Instinet LLC in New York. “Earnings and rate speculation are adding to the uncertainty.”