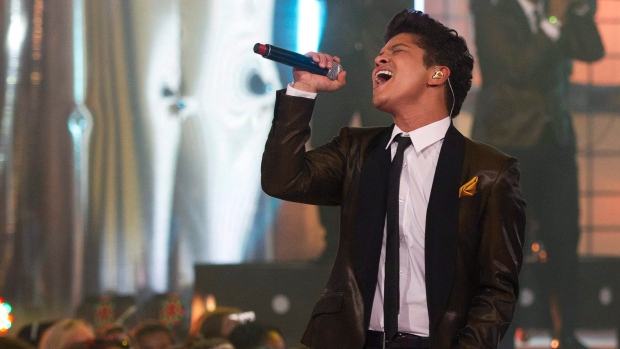 Bruno Mars performs during the 2011 MuchMusic Video Awards in Toronto on Sunday, June 19, 2011. , The Canadian Press

For more than six years, pop star Bruno Mars has quietly backed the small rum brand, SelvaRey. It began catering his events and parties in 2014, and although the singer got involved in 2015, his commitment has largely gone unnoticed. An Esquire round-up of celebrity-owned boozes in 2018 neglected to mention him, even though the That’s What I Like singer had just taken home Album of the Year at the Grammys.

But 2020 marks the year Mars intends to make a splash with it. “My friends are always asking me, ‘Where can I get this bottle?’ So I decided I wanted to take it to a funkier place,” he says.

In an interview announcing his new title of “creative visionary” for the brand, the singer says that it started as a hobby—but now, “The goal is global domination. Rum takes you on an instant vacation,” he adds. “I drink it and I want to start dancing.” He laughs when he says that the rum’s new tagline—“Tropical luxury”—embodies his spirit: “How can you say tropical luxury and not think Bruno Mars?”

SelvaRey is produced in Panama by the notable rum distiller Francisco Fernandez, who was one of the leaders of the Cuban rum industry under Fidel Castro. It comes in two styles, white and the less conventional chocolate rum. The white retails for about US$30; the chocolate is around US$35.

The white rum is unexpectedly smooth, with a light vanilla sweetness. The darker version is infused with chocolate and has the rich flavor and scent of its namesake ingredient. They’re both excellent sipped straight, though the white lends itself to a wide variety of tropical cocktails. (Mars prefers coquitos, also known as Puerto Rican egg nog, as well as pina coladas.) The chocolate rum is an apt choice for dessert drinks.

Among the singer’s contributions, besides posting on social media, is to redesign the packaging; he changed the bottle from an unremarkable squat shape to a vessel with a tropical, ‘70s-style design. He was also involved in the tasting. “It was a science lab at my house at one point,” he says. “This is amazing, this is gross—that’s what it boils down to.”

Rum has gained traction in recent years. The global market is valued at around US$15 billion, and expected to reach US$21.5 billion by 2025. A 2020 trend forecast by drinks analysts IWSR indicated that the long-running trend toward premium styles will continue in most global markets, moving away from perceptions of the spirit as a “low-quality party drink.”

The announcement continues a seemingly unending line of celebrities who have gotten involved in the spirits business, ranging from George Clooney’s stake in Casamigos to Nick Jonas’s Villa One brand with fashion designer John Varvatos. Tequila has been the spirit of choice for most high-profile celebrities, though actor Ryan Reynolds got involved two years ago with Aviation Gin, which recently sold to Diageo in a deal worth up to US$610 million.

Mars has an equity stake in SelvaRey; the amount of his investment is undisclosed. He was introduced to it by co-founder Seth Gold, a brand strategist. Gold says that while such categories as gin and tequila have gotten a lot of love in the U.S., rum has been overlooked, and there’s an affinity for the spirit around the world in target markets such as the Philippines (where Mars's mother hails from) and Japan.

“We’re rolling out the white rum and chocolate now in about 25 markets,” Gold told Pursuits via email. In December, SelvaRey will start being sold in China, Hong Kong, and Taiwan, but it’s still very small: He expects the company to sell more than 30,000 cases in 2021. (Last year, Bacardi sold 18 million 9-liter cases worldwide.)

Mars compares the behind-the-scenes, years-long process to making music. “People don’t see me pulling my hair out writing, because that’s not what I want them to to see,” he says. “There’s chaos that has to happen for anything that is going to be good.”

He says that he and Gold “have been going back and forth for years, having trials with the bottles and some of these flavors, and when it’s there, you feel so confident.”

Mars also says the brand will be expanding to further styles, including a higher-priced option. “Don’t worry about luxury rum,” he says. “The party is just getting started.”