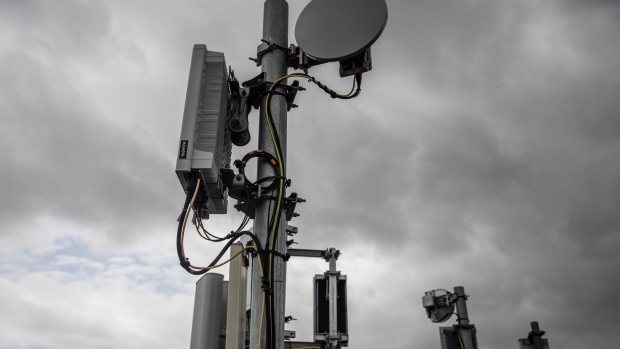 Telecommunications antenna sit on the roof of a commercial building in Barcelona, Spain, on Thursday July 16, 2020. Cellnex Telecom SA is considering bidding for a stake in CK Hutchison Holdings Ltd.’s European wireless tower business, according to people familiar with the matter, as it scouts for new acquisitions. Photographer: Angel Garcia/Bloomberg , Bloomberg

(Bloomberg) -- Cellnex Telecom SA is in advanced talks to acquire CK Hutchison Holdings Ltd.’s European wireless tower business, according to people familiar with the matter, which would mark one of Europe’s biggest telecom infrastructure deals.

Europe’s largest wireless tower operator is discussing a purchase of the CK Hutchison portfolio for about 9 billion euros ($10.7 billion), said the people, who asked not to be identified because the matter is private. No final agreement has been reached, the people said. The terms, including price and structure, may change and talks could still fall apart.

CK Hutchison’s American depository receipts climbed as much as 5.7% to $6.26 after Bloomberg reported on the discussions, while Cellnex’s U.S. shares gained as much as 3.2%.

CK Hutchison, founded by Hong Kong billionaire Li Ka-shing, has been working with advisers to carve out its European towers as a separate subsidiary and had been considering selling a minority stake in the business, Bloomberg News reported in July.

CK Hutchison said in August of last year that it plans to create a new infrastructure unit holding about 28,500 towers spread across the region, opening the group up to the types of infrastructure deals that carriers across the continent have been pursuing. Proceeds from those transactions will help them cut debt and pay for costly 5G networks.

Shares of Cellnex have risen 48% this year, giving the company a market value of 25.8 billion euros. The Stoxx Europe 600 Telecommunications Index has fallen 19%.

Barcelona-based Cellnex said on Friday that it agreed to pay Iliad SA 804 million euros ($950 million) to acquire towers in Poland. That deal follows Cellnex’s entry into Portugal earlier this year and follows a move in July to raise about 4 billion euros to fund acquisitions.