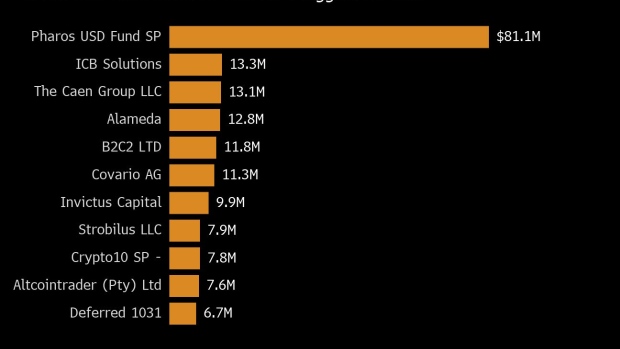 (Bloomberg) -- Among the more than 100,000 creditors of Celsius Network Ltd., the crypto lender that filed for bankruptcy on Wednesday, one entity stands out: Pharos USD Fund SP.

Celsius’s Chapter 11 filing shows that it owes Pharos $81 million, a claim twice as large as that of the second-biggest creditor. The document lists a Cayman Islands address for Pharos, along with an email: admin@lanternventures.com.

A Google search for Pharos USD Fund SP doesn’t yield any results. A job posting on an otherwise bare-bones website of Lantern Ventures describes it as a London-based proprietary trading firm focused on cryptocurrencies. The website -- and Lantern Ventures’ LinkedIn page -- make no mention of Pharos, but an SEC filing from April lists Pharos as an affiliate of Lantern.

The firm has about $400 million under management, more than half of which is owned by investors outside the US, the SEC filing shows. While Lantern Ventures’s website and LinkedIn page don’t say how much the firm manages, one person who lists himself as a trader there calls it a “550m$ cryptocurrency hedge fund” on his LinkedIn profile. A filing with the UK’s Companies House shows Lantern Ventures had £3.1 million ($3.7 million) in net assets as of May 2021. A year earlier, the company listed £508,000 ($600,050) in net liabilities.

Lantern Ventures does, however, have employees whose career histories listed on LinkedIn intersect with that of a prominent crypto billionaire whose firm also is a major creditor to Celsius: Sam Bankman-Fried.

The firm’s Chief Executive Officer Tara Mac Aulay is a co-founder of Alameda Research, Bankman-Fried’s crypto trading firm, she said during a panel at a conference in London in November. She also worked at the Oxford, UK-based Centre for Effective Altruism, a charity where Bankman-Fried was formerly a director of development, according to her LinkedIn profile.

Mac Aulay’s LinkedIn page, which describes her as a pharmacist by training, doesn’t mention her former role at Alameda.

At least three other Lantern Ventures employees have worked for either the charity or its affiliate Giving What We Can, of which Bankman-Fried is listed as a member, according to the employees’ biographies on LinkedIn.

Another Lantern Ventures employee, Victor Xu, was head trader at Alameda for nine months in 2018 according to his LinkedIn profile. Celsius owes Alameda $12.8 million, the bankruptcy filing shows.

Mac Aulay and Xu didn’t respond to requests for comment. An email to the Lantern Ventures address listed in the filing went unanswered. Alameda didn’t immediately respond to an email.

Mac Aulay is listed as Lantern Ventures’ largest shareholder as of May 2021, according to a Companies House filing. Other investors include Luke Ding, a former partner at Brevan Howard Asset Management, and Libertus Capital’s Pamir Gelenbe.

Bankman-Fried has emerged as a central player in the recent crypto market tumult, showing up as a major borrower and creditor in this month’s bankruptcy of cryptocurrency lender Voyager Digtal Ltd. His crypto exchange, FTX US, is injecting capital into BlockFi Inc., another distressed crypto lender, and has an option to acquire it.