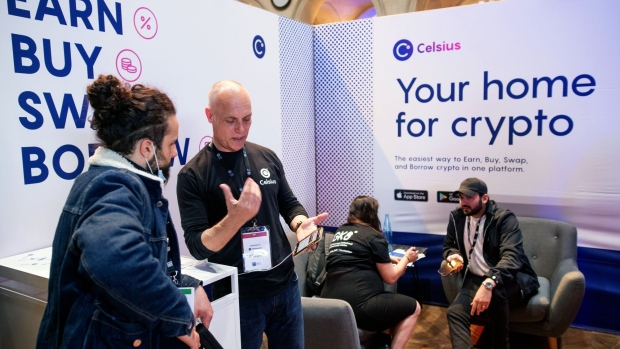 The booth of the Celsius Network crypto platform at the Paris NFT Day conference in Paris, France, on Tuesday, April 12, 2022. Paris NFT Day is part of the three-day Paris Blockchain Week Summit that brings together the brightest minds, business professionals and leading investors in the blockchain industry, according to the event's organizers. , Bloomberg

(Bloomberg) -- Crypto lender Celsius Network, which halted user withdrawals more than two weeks ago amid liquidity issues, said it’s exploring options such as “strategic transactions as well as a restructuring of our liabilities.”

The lender didn’t elaborate in a blog post Thursday. Celsius, which let users lend out their coins for up to more than 18% annualized rate, grew to more than 1.7 million users and at one point had more than $20 billion in assets before its fall from grace. On June 12, Celsius halted withdrawals and other functions citing “extreme market conditions.” The company made several risky bets that didn’t pay off, as coin markets tanked. Celsius is one of a number of crypto firms battling liquidity issues that include crypto lenders Babel and BlockFi and hedge fund Three Arrows Capital.

Celsius last provided an update to users on June 19.

An infusion from FTX, one the largest crypto exchanges, appears unlikely. Celsius approached FTX head Sam Bankman-Fried, and asked for a bailout but was rejected, according to a person familiar with the matter. Celsius and FTX didn’t immediately return requests for comment.

(Corrects to billions in the second paragraph.)