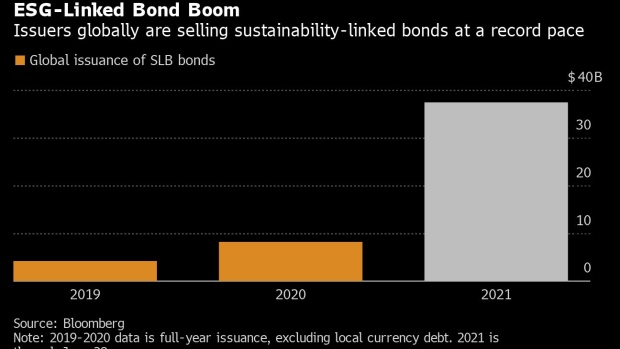 A worker climbs into the driver seat of a Cemex SAB cement truck at a construction site in Mexico City, Mexico, on Thursday, Jan. 26, 2017. Cemex SAB would be one of the companies best-positioned to profit from a wall that could cost $15 billion or more as it has operations along both sides of the border. , Bloomberg

(Bloomberg) -- With Cemex SAB's decade-long effort to recapture an investment-grade rating now within reach, the largest cement producer in the Americas is studying its first so-called sustainability-linked bond sale in a move that could broaden its investor base.

After aggressively cutting its debt levels in recent years, Cemex said last week that a much coveted return to investment-grade status could come in 2022. That’s prompting plans to lure in a new group of creditors to finance projects that meet certain environmental or social goals, Cemex’s top executives said in an interview in New York.

Cemex already considered selling bonds linked to environmental, social and governance initiatives at the start of the year, but decided to raise $1.75 billion in dollar-denominated junk bonds because that market was “so attractive,” Chief Financial Officer Maher Al-Haffar said in the interview.

With net debt to Ebitda set to fall to 3 times, the company expects the higher credit rating to follow and bring lower borrowing costs. The San Pedro Garza Garcia, Mexico-based company already has a loan facility of more than $2 billion designated as sustainability-linked.

“We’ve done it on the bank side and we would be very excited to do it on the bond side,” Al-Haffar said.

“At some point, every kind of financing will be green, that’s the way I see it,” Cemex Chief Executive Officer Fernando Gonzalez said in the interview on June 24.

Ever since a brush with default last decade, Cemex has been on a quest to regain an investment grade rating. The company has slashed its debt by about $7 billion since 2012 when it reached $17.3 billion. As of last quarter, it stood at $10.4 billion. The debt was paid off by selling billions of dollars of non-core assets over the years and cutting costs.

Cemex’s 10-year dollar bonds sold in January yield 3.6%, compared with average yields of 6.14% for junk-rated peers and 2.44% for those with an investment grade rating, according to Bloomberg Barclays indices.

Companies and countries globally have issued a record $37.4 billion in sustainability-linked bonds so far this year, according to data compiled by Bloomberg. That figure could reach between $120 billion and $150 billion by the end of this year, said Marilyn Ceci, JPMorgan Chase & Co.’s global head of ESG debt capital markets.

A sustainability-linked sale fits with two of Cemex’s goals: a return to investment grade and net-zero carbon dioxide cement production by 2050.

Gonzalez said in the interview that any further asset sales would be part of its growth strategy for North America and Europe, rather than to reduce leverage.

“This whole trend toward investment grade for us is going to open a lot of opportunities to re-do different slices of our debt stack over the next 12-24 months,” added Al-Haffar.

In the meantime, Cemex is investing more in energy efficiency and expanding its use of renewable energy. And climate goals are now a factor in senior management compensation at the firm.

That may not be enough to attract some ESG investors, should the company go through with a sustainability bond. Investors and analysts around the globe have raised questions about whether such securities are really green, pointing to a lack of ambition in the goals companies pledge to meet. More traditional ESG debt restricts the use of bond proceeds to specific projects that meet environmental standards.

Nuveen, the $1.2 trillion money manager, is staying away from sustainable-linked bonds because the debt structure is “lacking,” Stephen Liberatore, head of fixed-income ESG and impact investing strategies, wrote in a blog post last month. Nuveen passed on deals from a U.S. high-yield issuer and an Indian cement company because the structure gave the issuers “too much latitude” to invest the proceeds, he said.

And any prescribed penalties “didn’t create sufficient incentive” for companies to pursue material changes in their carbon footprints, Liberatore said.

Cemex’s dual goals might provide motivation. More than ever before, credit rating firms are factoring in environmental and social risks. Moody’s Investors Service cited ESG risks as material credit considerations in 85% of private-sector rating actions in 2020, up from just 32% in 2019, the company said in a report Monday.

Being a climate laggard can also be costly for companies. Issuers can reduce interest costs by 0.15 percentage point or more by selling labeled bonds. North American pipeline operator Enbridge Inc. managed to cut its borrowing costs by 5 basis points when it sold $1 billion in ESG debt last week.

ESG and sustainability-linked debt should also fare much better both for the issuer and the investor in times of heightened volatility, Al-Haffar said.

“We believe that sustainable financing gives Cemex access to a broader investor base, which ultimately supports a more efficient price discovery, while providing the opportunity to reaffirm our conviction in addressing climate change,” he said. “Sustainable securities tend to be more price resilient throughout economic cycles, which should provide important benefits to investors during risk-off periods.”