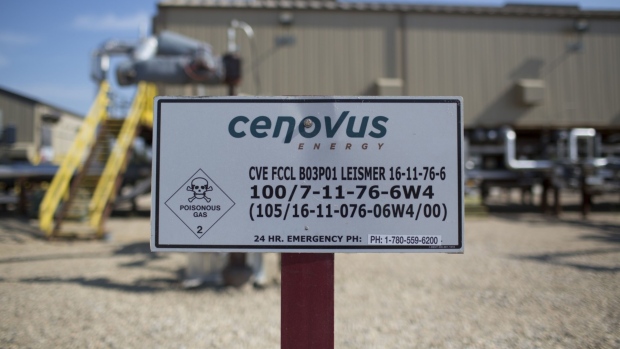 A sign stands near a well pad at Christina Lake, a situ oil production facility half owned by Cenovus Energy Inc. and ConocoPhillips, in Conklin, Alberta, Canada, on Thursday, Aug. 15, 2013. Bloomberg/Brent Lewin

CALGARY - Cenovus Energy Inc. reported a fourth-quarter profit of $113 million compared with a loss of nearly $1.36 billion in the same quarter a year earlier.

The oil sands company says the profit amounted to nine cents per share for the quarter ended Dec. 31 compared with a loss of $1.10 per share in the fourth quarter of 2018.

Total production from continuing operations amounted to 467,448 barrels of oil equivalent per day, up from 432,713 in the last three months of 2018.

Cenovus says it successfully ramped up its crude-by-rail shipping capacity in 2019 and topped its target in December with average rail loading volumes of nearly 106,000 barrels per day.

It added it will reduce its emissions per barrel by 30 per cent by 2030, while keeping its total emissions flat.