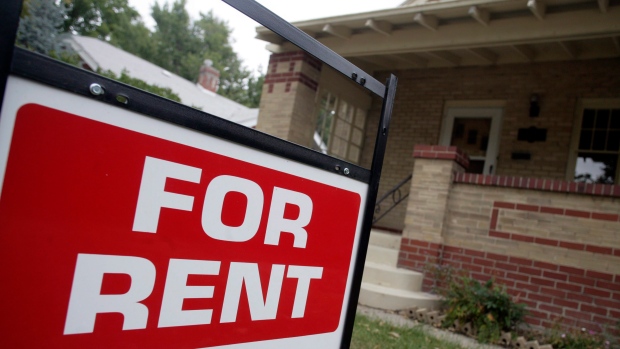 a "for rent" sign is posted outside a home in Denver. U.S. home rental prices , The Canadian Press

OTTAWA -- Not everyone wants to own a home these days, Evan Siddall concedes -- not even his own millennial-age son. For the head of the Canada Mortgage and Housing Corp., that's really saying something.

But Siddall's experience is far from uncommon, the latest census figures show: 30-year-old Canadians are less likely to own a home today than their baby boomer parents did at the same age, mirroring a modest but unmistakable decline in the national home ownership rate.

The figures should change the way Canada thinks about its real estate sector, said Graham Haines, research and policy manager at the Ryerson City Building Institute in Toronto. Policy-makers have focused almost exclusively on policies to promote home ownership over the last 20-plus years, he said, pointing to tax policy and incentives.

"We have to start thinking about -- if rent is going to start becoming a more important part of our real estate sector once again -- how we make sure we're building the right type of rental, rental where we need it and rental that's affordable for the people who are going to be using it," Haines said.

In 2016, more than 9.5 million of the 14.1 million households captured in the census owned their homes, an ownership rate of 67.8 per cent -- down from 69 per cent in 2011 after 20 steady years of baby boomers flooding the real estate market.

As values have climbed in cities like Toronto, Vancouver, Calgary, Edmonton and Ottawa, so too have the percentage of renters, even though the supply of purpose-built rental units nationally has been on a decades-long decline as developers build more condominiums than apartments.

Census data showed renters are more likely to be over-stretched financially to keep a roof over their heads.

Almost 40 per cent of renters captured in the census spent more than 30 per cent of their average monthly income on housing -- a figure largely unchanged from 2011 and more than double the approximately 17 per cent recorded for homeowners.

Overall, affordability remains an issue for almost a quarter of Canadian households, a figure that hasn't changed much in a decade, with the pressure most acute in the hot housing markets of Toronto and Vancouver.

The federal Liberal government has promised to address affordability issues as part of an $11.2 billion, 11-year housing plan to be released in the coming weeks. It's expected to have a heavy focus on building affordable units, with a new portable housing benefit that would be tied to individuals, rather than properties.

Speaking earlier this fall about work on the strategy, Siddall said that the focus wasn't solely on helping the ranks of homeowners.

"Rent or own, a home is a home," Siddall said in an interview.

The migration to home ownership is likely to pick up for millennials in the coming years as they start families and look for homes or condominiums -- a class of home that saw a 1.2 per cent increase in households from 2011 -- to fit their growing brood. At the same time, seniors will be looking to downsize.

That means the baby boomers will continue to fuel changes in the housing market by how long they remain homeowners and whether their children and grandchildren decide to rent or buy.

Haines said the two age groups, even though they are at different points in their lives, are likely to compete for the same kind of two-bedroom units that are a rarity in the market, potentially driving up costs. That may require policy-makers to get more involved in the market to make more family-friendly housing gets built instead of a heavy focus on studios and one-bedroom units, Haines said.

"We've fallen into this trap of building (condo) units for investors rather than end users," Haines said.

"There are positive signs that we're starting to recognize that over the last 20 years, we've sort of let the market do what the market wants and maybe we need a little more attention (to make sure) that we're actually getting what we need for our population."