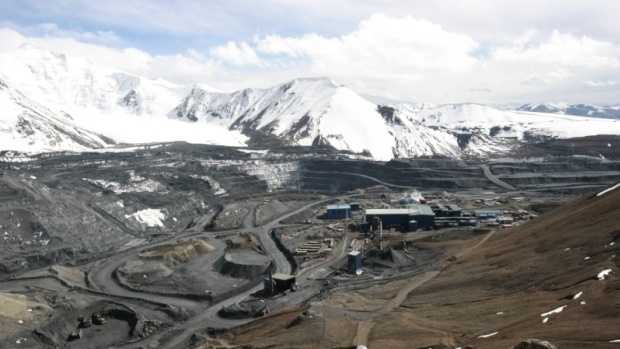 Canadian miner Centerra Gold Inc (CG.TO) said on Monday it has reached an agreement with Kyrgyzstan to settle all outstanding disputes with the Central Asian country over its Kumtor gold mine, the company's and the country's biggest.

All Kyrgyz environmental claims, other proceedings and court orders against Kumtor will be dropped and Centerra will be able to transfer funds out of the country that had been frozen by the government, the company said in a statement.

Centerra's shares rose 3 per cent to a four-and-a-half year high of $9.04 on the Toronto Stock Exchange.

Toronto-based Centerra is the biggest foreign investor and taxpayer in Kyrgyzstan, contributing up to 10 per cent of the impoverished nation's gross domestic product. The two sides had been on a collision course as the country tried to extract more profit from the mine.

The Kyrgyz Republic, through its state-owned entity, Kyrgyzaltyn JSC, owns a 26.6 per cent stake in Centerra.

"We view this development as positive," Canaccord Genuity analyst Rahul Paul said in a note to clients, adding that the settlement had been somewhat expected after Centerra said last week that talks were at an advanced stage.

Paul said that US$299 million of Centerra's cash had been trapped in Kyrgyzstan. Centerra said it was in the process of transferring the cash over and above what it needed for working capital.

"First and foremost, this agreement is a comprehensive resolution to all of the outstanding matters affecting the Kumtor project," Centerra Chief Executive Scott Perry said.

The proposed settlement would affirm 2009 mine agreements, including tax and fiscal rules, the company said.

Under the deal, the Canadian miner will make a one-time payment of US$50 million to a new, government-run nature development, alongside annual payments of US$2.7 million.

Centerra will also pay US$7 million to a cancer care support fund and another US$3 million one year after the deal closes.

Centerra and the government would also consider other potential investment opportunities in Kyrgyzstan, as well as at the Kumtor mine.

The settlement follows a bitter dispute during which the miner took the nation to international arbitration in 2016 over a disagreement on profit sharing.

Last year, Centerra was fined around $100 million for environmental damage by a court in Kyrgyzstan, while another regulator filed a US$230 million lawsuit against the company.