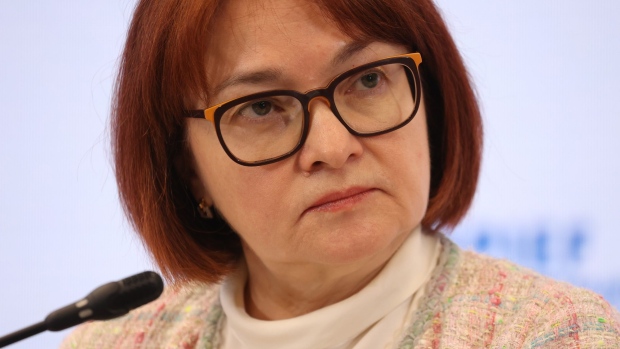 Elvira Nabiullina, governor of Russia's central bank, pauses during a panel session on day two of the St. Petersburg International Economic Forum (SPIEF) in St. Petersburg, Russia, on Thursday, June 3, 2021. President Vladimir Putin will host Russia’s flagship investor showcase as he seeks to demonstrate its stuttering economy is back to business as usual despite continuing risks from Covid-19 and new waves of western sanctions. , Bloomberg

(Bloomberg) -- Top government officials failed to reach an agreement on how to regulate cryptocurrencies at a meeting Tuesday, according to people familiar with the talks, despite President Vladimir Putin’s request for them to find a compromise.

Bank of Russia head Elvira Nabiullina, Finance Minister Anton Siluanov and Deputy Prime Minister Dmitry Grigorenko didn’t get any closer to a deal and decided only to formalize their disagreements, the people said, asking not to be identified because the meeting is not public.

The press service of the central bank and a spokesman for the Finance Ministry declined to comment on the meeting. A spokesman for Grigorenko did not immediately respond to a request for comment.

Little progress has been made in agreeing on how Russia should regulate crypto, despite Putin calling for a quick solution in January. The Finance Ministry and central bank were supposed to prepare a draft law on the matter by Feb. 18, Kommersant newspaper reported last week.

The central bank maintains there are too many risks related to crypto and proposed a ban, according to a letter Friday from Nabiullina to Siluanov that was seen by Bloomberg. The central bank’s press service confirmed the contents of the letter.

The regulator argues crypto resembles a pyramid scheme and poses a threat to people’s financial wellbeing, the financial system and the economy. The government wants to regulate digital currencies in order to bring them out of the shadows and attract investment.

Russia’s existing laws acknowledge crypto assets but do not allow them to be used as payment, a situation that means they are largely unregulated. A recent government paper estimated Russians own about 2 trillion rubles ($26 billion) in crypto.