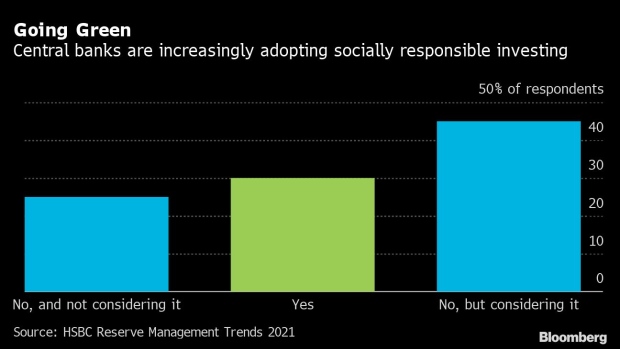 The questionnaire carried out between February and April found that officials at 57 central banks, with assets worth $3.8 trillion, were either already factoring social and environmental criteria into decision-making or were considering doing so. Just 25% of institutions weren’t embarking on the trend, citing a lack of compatibility with mandates as the main reason.

At a time when Europe is looking to become the biggest global issuer of green debt, European Central Bank President Christine Lagarde has made work on climate change a priority.

Climate change is a key element of the strategic review currently underway at the ECB, and monetary authorities elsewhere are also addressing the topic.

The Swiss National Bank last year excluded coal miners from its equities portfolio, while earlier this month the Bank of Japan gave one of its strongest hints yet that the need to take action on climate change was on its radar.

At 43%, the share of institutions holding green bonds was higher than for inflation-linked bonds or mortgage-backed securities. Interest in green bonds was particularly strong among high-income countries, the HSBC-sponsored poll found.

Central banks have responded to the Covid-19 pandemic with record stimulus, and the survey found reserve managers cited the low-yield environment as their biggest challenge. Particularly in high-income countries, they were considering investing in new asset classes.

In the long run, digital currencies were seen as having an impact on management of reserves, the survey said.