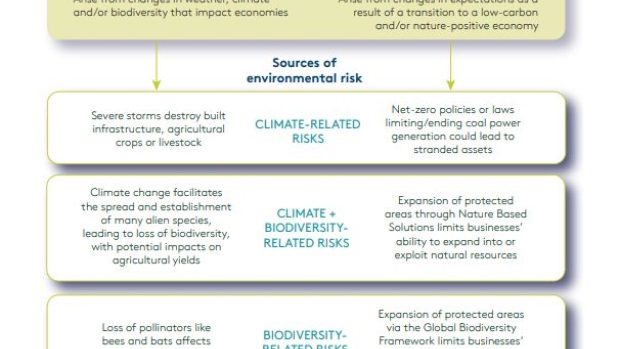 (Bloomberg) -- Biodiversity loss poses a “significant and under-appreciated” threat to financial stability and its status needs to be elevated by regulators, according to a study by central bankers, financial supervisors and academics.

It’s “potentially as economically and financially impactful as climate change,” said Nick Robins, co-chair of the study group and a professor at the London School of Economics. The report shows that the twin threats now need to be “tackled in a joined-up way by central banks and supervisors.”

The report, which provides the first global assessment of why and how central banks and supervisors can respond to rising risks from biodiversity loss, makes five recommendations for central banks and financial regulators:

The study is co-authored by a special group set up by the Central Banks and Supervisors’ Network for Greening the Financial System (NGFS) and INSPIRE, an independent research network. It consisted of more than 100 central bankers, supervisors and researchers.

The report also sets out a research agenda for central banks and academics to continue to address some of the analytical and data gaps identified.

Global central banks have been stepping up efforts to combat climate change, with former Bank of England Governor Mark Carney in 2015 raising the alarm about the “tragedy” and warning specifically about “re-pricing” events.

“Biodiversity loss could have significant macroeconomic implications,” said Ravi Menon, managing director of the Monetary Authority of Singapore and chair of the NGFS. “Failure to account for, mitigate, and adapt to these implications is a source of risks.”