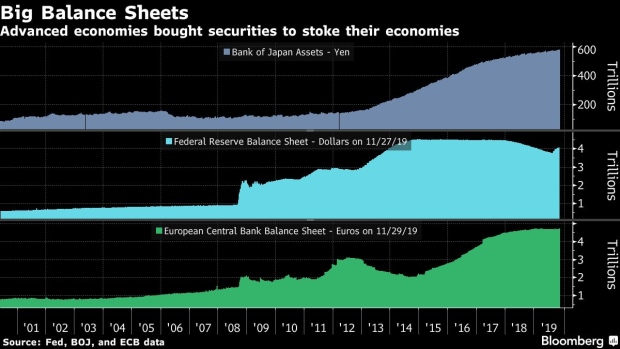 (Bloomberg) -- Major central banks are set to keep pumping money into financial markets and economies next year, although at a slower pace than recently.

The combined monthly balance-sheet expansion of the Federal Reserve, European Central Bank and Bank of Japan will end this year at the highest level since 2017 as each sucks up bonds either to boost their economies or ease strains in money markets, according to Bloomberg.

While the rate of buying will peak at the turn of the year and slow throughout 2020, the expansion still marks a reversal from the start of this year when the total balance sheet was shrinking, with the Fed actively paring its holdings and only the BOJ adding purchases. Debatable is how potent the buying will prove as the world economy remains threatened by the U.S.-China trade war.

The Bloomberg calculations show the combined balance-sheet growth of the three biggest central banks will reach almost $100 billion a month by the end of this year. The spike will fade somewhat in 2020, reaching about $50 billion by the middle of next year.

One difference from previous episodes of QE is that although the ECB and BOJ are actively seeking to stoke economic growth by restraining market borrowing costs, the Fed argues it’s purchasing Treasury bills at an initial monthly pace of $60 billion because of recent turmoil in money markets.

“One force which is back in evidence is central-bank liquidity,” Matt King, global head of credit product strategy at Citigroup Inc., wrote in a recent note to clients. “Despite the Fed’s protestations that its adjustment to bank reserves is not QE, its turnaround this year has helped drive global central bank securities purchases from 10-year lows to decade-average levels.”

Nevertheless, investors are welcoming the extra liquidity. That’s despite Fed Chairman Jerome Powell’s protests that the new U.S. purchases are “in no sense” quantitative easing because they’re focused on very short-term assets and aimed at alleviating a cash shortage in the money markets. The MSCI World Index of stocks is up 21 this year.

“The bulk of the effect is psychological,” said Stephen Stanley, Amherst Pierpont chief economist. “The Fed is expanding the balance sheet. The public sees this as an easier monetary policy even as the Fed insists that it is not a change in policy, and thus asset prices rise.”

Whether the bigger balance sheets will actually power economic demand is still in doubt though. Global growth remains modest despite a decade of ultra-loose monetary policy.

“There is plenty of liquidity sloshing around but firms are reluctant to invest,” said Chua Hak Bin at Maybank Kim Eng Research Pte. in Singapore, pointing to the U.S.-China trade war as a source of uncertainty.

Ben Emons, managing director for global macro strategy at Medley Global Advisors in New York, is more optimistic. He argues that the renewed burst of QE will be more effective than previous cycles given the world economy isn’t in crisis, and so the liquidity is more likely to spur spending.

At the Fed, the balance sheet is growing faster than when it was first on its way to $4 trillion six years ago. The institution had been gradually shrinking its massive securities holdings, but the process drained too much cash out of the system, contributing to a spike in market rates in September. It reversed course to restore ample liquidity and officials have uniformly argued it’s not aimed at affecting asset prices.

Economists at Societe Generale SA say it’ll be less clear cut whether the new round of buying amounts to QE when the Fed replaces temporary funds with permanent purchases which could total $200 billion. The strategy of swapping maturing agency mortgage backed securities with U.S. Treasuries may also have QE-style effects, they said in a report to clients this month.

Meantime, the BOJ’s balance sheet, which has expanded rapidly since Governor Haruhiko Kuroda launched massive monetary easing in 2013, has grown 4.2% over the past year to 577 trillion yen ($5.3 trillion) as of Nov. 20, well beyond the economy’s size.

The pledge to pump cash into the economy until inflation stays above 2% in a stable manner means there’s no prospect of it shrinking any time soon. Inflation stripped of food and energy prices grew just 0.4% last month.

Over at the ECB, President Christine Lagarde is taking on a balance sheet that has soared to almost 4.7 trillion euros ($5.2 trillion), or four times the size it was prior to the global financial crisis. Much of the increase has come from quantitative easing, which spent 2.6 trillion euros from 2015 until the end of last year, and which has just resumed at 20 billion euros a month to combat renewed economic weakness.

Others may even join in. Reserve Bank of Australia Governor Philip Lowe this week delivered a speech which highlighted a reluctance for quantitative easing, yet laid out the conditions required for the unorthodox measures as well as what the RBA would buy.

To contact the editors responsible for this story: Simon Kennedy at skennedy4@bloomberg.net, Paul Gordon