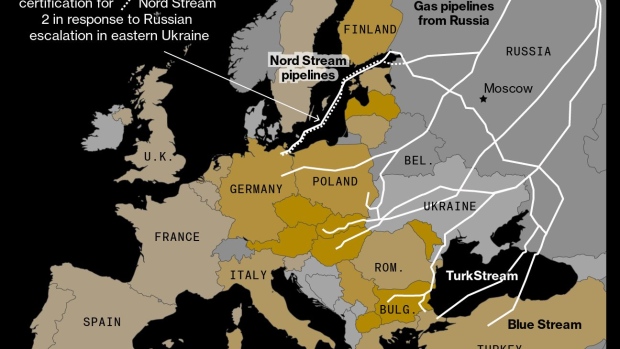 (Bloomberg) -- Conflict between Russia and Germany risks leaving one of central Europe’s biggest natural gas depots empty next winter, just as the continent urgently needs to ensure supplies due to the war in Ukraine.

The Haidach underground depot -- located in Austria but connected only to the German grid -- is unlikely to get filled after Moscow cut supplies to a Gazprom PJSC unit seized by Berlin’s government, according to energy officials in Vienna, who asked not to be identified in exchange for discussing sensitive topics. The depot is equivalent to about a quarter of Austrian storage capacity.

Europeans need to build fuel inventories to keep warm and run their industries next winter. But Russian sanctions on Gazprom Germania GmbH -- in retaliation for Berlin seizing the unit earlier this year -- are depriving Haidach of crucial supplies needed for energy security should the war in Ukraine disrupt gas transit to the continent.

To make matters worse, Austrian efforts to break the German bottleneck and stash gas at the site is plagued by pipeline constraints. The Alpine country would need to find a way to connect Haidach to the Austrian network and the nation’s grid operator said it’s still studying how it could meet the government’s demand.

“From a technical perspective, a connection between the storage facility and the Penta West pipeline would have to be built,” operator Gas Connect said in emailed response to Bloomberg questions.

Austria’s Penta West is the closest pipeline that could be extended to connect Haidach with the rest of Austria’s 900-kilometer (559-mile) network. Receiving the necessary regulatory and environmental permissions for that could take years, one official said. Even if all approvals were granted, the Penta West pipeline’s capacity is already fully booked by traders fueling west European markets.

A second gas tender being prepared in Vienna, which could be awarded to help fill Haidach with supplies other than Russian, is also facing challenges because there’s no way of verifying where the fuel comes from once it’s been injected into pipelines, a second official said.

Haidach was built by Gazprom and Germany’s Wingas Gmbh and opened in 2007. It’s operated by Austria’s RAG AG. The facility has capacity to store about 33 terawatt hours of gas, enough to cover almost four months of Austrian consumption.

Austria gets about 80% of its gas from Russia and has warned that being cut off from its biggest supplier would plunge the country into recession. Leonore Gewessler, Austria’s top energy official, said earlier this month that the country was prepared to spend as much as 5 billion euros ($5.4 billion) to top off storage depots, through tenders that may include Russian suppliers.

On Tuesday, the country paid a 45% premium over benchmark European prices in its first tender to create a strategic gas reserve before heating season begins.