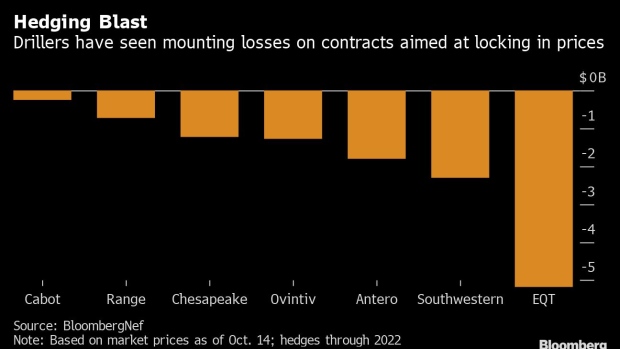 The largest U.S. gas driller has exited about 20% of  its caps for the fourth quarter and 10% of those for 2022, Chief Executive Officer Toby Rice said during an interview on Thursday, referring to options instruments intended to lock in prices for the company’s production. Contracts trailing current market prices could cost EQT more than $5 billion through the end of next year, according to a BloombergNEF estimate based on figures disclosed by the company in July.

“Obviously, we were wrong,” Rice said. “I don’t think anybody anticipated this type of price movement.”

Natural gas futures in the U.S. have more than doubled this year, hitting a 12-year high amid depleted inventories domestically and shortages in Europe and Asia. The price spike has caught many U.S. producers off-guard, following years of depressed prices caused by a surge in shale production. EQT is hardly alone in hedging much of its output: collectively, expected hedging losses for U.S. producers through 2023 stand at $34 billion, BloombergBNEF estimated this month.

Investors punished EQT’s stock after the shale explorer disclosed in July a major increase in hedging activity to protect its balance sheet against price drops. The moves effectively capped how much money the company could rake in for its gas, meaning it wouldn’t benefit as energy prices moved sharply higher.

“We have reacted to the environment we’re in,” Rice said. “Unwinding those hedges has started giving our investors more exposure to the rising commodities prices.”

While EQT has locked in prices for most of next year's projected output, the company has hedges in place for less than 15% of its 2023 supplies, Rice added. ''Our free cash flow forecast is exposed to what we think is a pretty bullish natural gas setup.”

As of the end of June, EQT had hedged about 80% of its output through next year at below $3 per million British thermal units. Benchmark futures have averaged about $4.50 since the end of June and touched a 12-year high above $6 earlier this month.