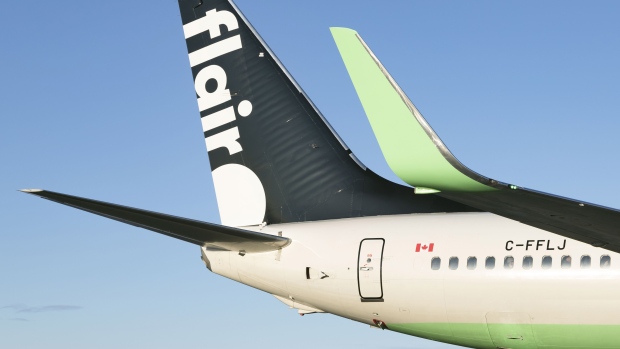 Amid a regulatory probe of Flair Airlines, CEO Stephen Jones says the budget carrier has rejigged its governance structure to align with Canadian ownership rules — but that its "significant" debt to an American investor remains a concern.

Jones's virtual news conference Thursday, held  amid an industry backlash to his request to exempt the budget carrier from domestic control requirements, sought to reassure Canadians that Flair is "here to stay" — a phrase he uttered four times.

The CEO, who has asked for an 18-month exemption to the rules, nonetheless says Flair conforms to legislation that allows no more than 49 per cent ownership of a Canadian airline by foreign entities.

The Canada Transportation Act also states no one foreign player can own more than a quarter of the carrier or exert effective control over it.

In a preliminary determination last month, the Canadian Transport Agency found Flair may not be "controlled in fact" by Canadians — a violation of federal law — as Miami-based investor 777 Partners holds a "dominant" influence over the airline.

“The CTA has confirmed to Flair that these amendments address all of the corporate governance concerns,” he said.

The agency declined to comment amid the federal transport regulator's review of whether the carrier is indeed Canadian and thus entitled to keep its operating licence.

The changes made by Flair include expanding the board to nine members from five and ensuring seven of them are Canadian, shrinking the number of directors 777 Partners can appoint to two from three and nixing the veto rights that 777 held "but never exercised," Jones said.

However, he also acknowledged that the debt Flair owes to 777 remains a potential issue under the ownership regime, while insisting there was no violation.

"Flair has already successfully refinanced nearly Canadian $80 million of its debt to 777 Partners. The refinancing of the balance of our debt will take some time, however. It is for this reason alone that we have sought a time-bound, 18-month exemption from the (Department) of Transport," Jones said.

The route out of the red and into the black ultimately runs through an initial public offering, he added, stating he aims to see Flair listed eventually on the Toronto Stock Exchange.

The airline leases six of its 14 aircraft from 777 and the rest from U.S.- and Ireland-based companies. While Jones said the federal regulator "has not raised issues with any" leases, the agency noted in its March 3 ruling that dependence on a third party to lease assets "that cannot be acquired otherwise" may be one indication of de facto control.

Some 58 per cent of Flair's voting shares are owned by Canadians, Jones said.

“Domestic control and ownership is not just a ‘nice to have,’ it is a necessary underpinning of the system, and should be defended. It ensures that there is fundamental fairness and protects against one diluted or foreign owned business causing harm to the competitiveness of the whole industry," the National Airlines Council of Canada and the Air Transport Association of Canada said in a joint statement.

Jones dismissed their arguments, saying the council represents the interests of legacy carriers, not passengers or healthy competition.

"We've clearly got them threatened. And so they're turning their so-called independent bodies into puppet mouthpieces, and people should see that for what it is," he said Thursday in a virtual interview.

Jones has also accused Air Canada and WestJet of having deployed anticompetitive practices.

In 2003, the Competition Tribunal ruled that Air Canada engaged in anti-competitive behaviour with WestJet, then a low-cost regional upstart.

Meanwhile, a Competition Bureau investigation continues into allegations of predatory pricing at WestJet and budget subsidiary Swoop, launched after Flair complained it was being crowded out from several smaller markets.

Jones said Flair did not meet the criteria for several federal COVID-19 relief programs accessed by other airlines. The LEEFF program, for example, had a $300-million revenue threshold which Flair fell below at the time.

"We applied for all available programs, and in the end we we didn't qualify," he said, noting that Air Canada and other carriers received billions in government loans during the pandemic.

Jones pointed to "growing pains," an industry-wide staff shortage — particularly pilots and ground handling — and the more limited passenger rebooking options available to a smaller carrier with as few as four flights per week on some routes.