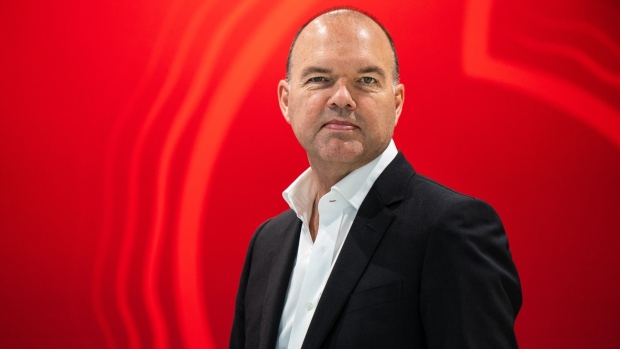 Nick Read, chief executive officer of Vodafone Group Plc, during an interview at their offices in London, UK, on Friday, May 20, 2022. Three-and-a-half years into his tenure as CEO, with activist investors and hedge funds on alert, 57-year-old Read deflects media reports of “pressure” and doesn’t actually admit to making any big mistakes himself: David Levenson/Bloomberg , Bloomberg

Turmoil at the top of UK Plc -- with Vodafone Group, Unilever, Reckitt Benckiser Group and others simultaneously hunting for new chief executive officers -- has prompted fears that Britain’s largest companies may become vulnerable to activist investors and opportunistic takeovers.

On Monday, Vodafone’s Nick Read became the 23rd CEO of a company in the FTSE 100 stock index to announce their departure this year, following executive changes at companies including Shell Plc, Rolls-Royce Plc and M&G Plc.

The high level of boardroom churn has led some investors in the City of London to predict that changes at the top could cripple the ability of companies to press the button on transformational acquisitions, or make them a target.

Some exits have been driven by the company, or by activist investors. Read’s departure from Vodafone followed a turbulent year in which the company’s share price fell sharply and management faced criticism from shareholders. A vehicle backed by French billionaire Xavier Niel bought 2.5% of Vodafone, raising the prospect that he would shake up the under-performing telecommunications group.

Unilever CEO Alan Jope announced his departure shortly after the arrival of Nelson Peltz, the owner of New York hedge fund Trian, on its board. Peltz, 80, disclosed a 1.5% stake in the company in May.

For others, the chief executive has chosen to jump ship, with the company falling victim to the global war for talent. The lure of a US job, with more lucrative pay, has tempted some executives to leave the UK.

Laxman Narasimhan announced his departure from Nurofen maker Reckitt Benckiser in September, jumping ship to US-based coffee-shop chain Starbucks Corp. after just three years in the role. Narasimhan, who was paid £6 million ($7.3 million) including bonuses and share options in 2021, will receive total compensation of as much as $17.5 million at Starbucks.

Others have been tempted away from the public markets by private equity. Earlier this year Rob Hattrell, the former head of EBay Inc.’s European arm, turned down the chief executive role at fashion retailer Asos in favor of a job at private equity firm TDR, the part-owner of Asda.

The CEO churn comes at a time when UK company valuations are depressed compared with their peers. Though shares have slumped worldwide since Russia’s invasion of Ukraine, UK boards are increasingly complaining of a conservative investor base that favors stable yield-paying stocks over innovative, faster-growing technology firms.

One FTSE 100 chairman, quoted in a recent report on stewardship by the public relations agency Tulchan, said the UK market “struggles to understand what a tech stock does.” “The bias of the UK investor base means it would probably be better for a tech company to be listed somewhere else,” they said.

Another chair, quoted in the report, said it was becoming “difficult and more so to recruit CEOs and chairs to London-listed boards.” “It’s not just the pay but also the scrutiny and second-guessing,” they said. “Most CEOs after being CEO to a public company look to go into private roles where there is more freedom to implement and deliberate strategy over a long period of time and where the frustrations are fewer.”

Focusing on dividends and shareholder returns may be the safe option, but eschewing transformational deals and other riskier strategies can open CEOs up to criticism from activist investors who swoop in, seeking faster change.

Sharon Sands, a partner at executive search firm Heidrick & Struggles’ London office, said that market volatility and economic uncertainty may be a factor in the level of chief executive churn. She said it was important to acknowledge that the “weight of the role is heavy.”

“Expectations of CEOs have broadened and deepened,” Sands said.

Depressed valuations and the threat of activist pressure have also left boards fighting to prove to shareholders that they are taking action.

Fran Minogue, managing partner of Clarity Search, said there was likely to be more change into the New Year for those companies whose shareholders are looking for growth and “want to be seen by their shareholders to be doing something.”

She said that post-Covid, boards were asking whether employees are “stepping up, is change being driven fast enough, are transformation programs going well?”

--With assistance from Swetha Gopinath and Loukia Gyftopoulou.