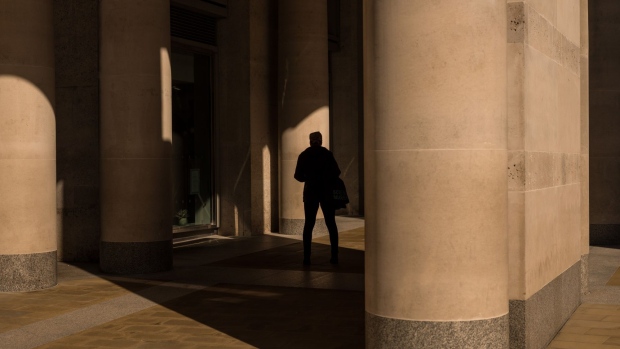 A lone pedestrian walks along an alleyway in the City of London, U.K., on Tuesday, March 24, 2020. The U.K. is in lockdown after Boris Johnson ordered sweeping measures to stop people leaving their homes "at this moment of national emergency." Photographer: Jason Alden/Bloomberg , Bloomberg

(Bloomberg) -- Company chiefs halting dividends to cope with coronavirus chaos and cutting salaries for rank-and-file staff should think about making sacrifices themselves, according to Britain’s biggest money managers.

The U.K. Investment Association, whose members run more than 7.7 trillion pounds ($9.5 trillion), told the country’s 350 biggest publicly traded firms that bosses’ compensation should reflect any cuts made to shareholder returns.

“If companies are canceling dividend payments or making changes to their workforce pay, IA members will support boards and remuneration committees that demonstrate how this should be reflected on their approach to executive pay,” Andrew Ninian, the association’s director of stewardship and corporate governance, said in a letter to the chairmen of companies in the FTSE 350 Index.

Investors ranging from mom-and-pop savers to the biggest pension funds rely on dividends to accumulate income and cover expenses. Outrage over the dividend cut forced on HSBC Holdings Plc has prompted the bank’s sizable Hong Kong retail investor base to demand an extraordinary general meeting.

Here’s How Payouts Are Shrinking in Europe: Dividend Tracker

Dividends had been growing in the U.K. before the coronavirus roiled markets. The amount returned to investors doubled in the last decade, and U.K. firms paid out a record 110.5 billion pounds to shareholders in 2019, according to analysis from Link Asset Services.

The Bank of England had also called on banks to scrap cash bonuses, but few of them have unveiled plans to cut variable compensation. Some financial executives are choosing to donate their pay: three top executives at Barclays Plc said Tuesday that for six months, they would donate a third of their salaries to coronavirus-related charities, following similar moves at Nationwide Building Society and the British TSB arm of Banco de Sabadell SA.