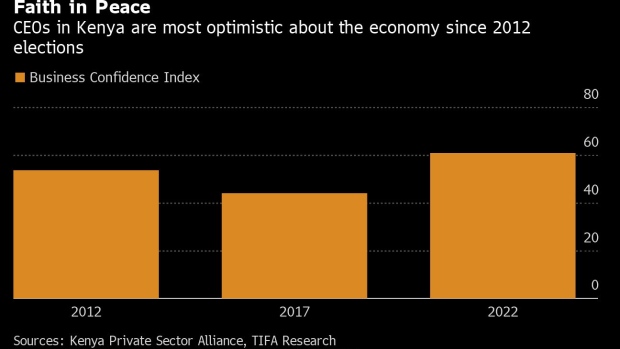 (Bloomberg) -- Most chief executive officers in Kenya expect economic conditions to improve after Tuesday’s election, according to an index measuring business sentiment.

CEOs also expressed optimism about hiring additional full-time employees in the next six months, which will translate into increased business opportunities, according to research conducted by the Kenya Private Sector Alliance, a business lobby group, and TIFA Research for the CEO Business Confidence Index. The gauge is the third to be conducted by KEPSA -- two others were done in 2012 and 2018.

Previous elections in Kenya have been marred by violence and allegations of vote rigging that dented economic growth and slowed investment. Gross domestic product growth has dipped in each of the years that the past six elections were held, according to a report by Deloitte LLP East Africa.

“A few hours before the election, Kenya is a safe and as cool as it can be,” Jane Karuku, chief executive officer at East African Breweries Ltd. said in an interview on Monday. “So I’m optimistic that we are going to have no issue in Kenya.”

Tourism and construction sector CEOs were the most optimistic in the KEPSA-TIFA survey, expecting conditions to improve in the second half of the year. Finance and ICT executives were the least buoyant and don’t expect much change in the coming months as their businesses have been performing positively in recent months, according to the survey.