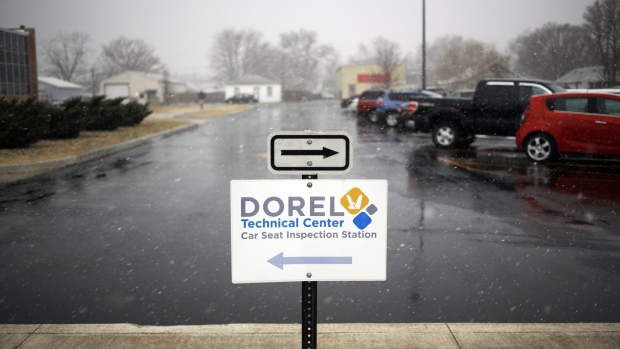 OTTAWA -- Shares of Dorel Industries Inc. rose Monday after the group looking to take Montreal-based company private raised its takeover offer by 10 per cent in an attempt to win the support of investors who have been critical of the bid.

The company said the buyer group led by U.S.-based Cerberus Capital Management LP is now offering $16 per share for the shares not held by members of the Schwartz family, including Dorel's chief executive officer. The firm had earlier offered $14.50 per share.

The increased offer was unanimously approved by Dorel's board, with members of the Schwartz family recusing themselves.

The new offer is more than halfway between the fair market value of $14 to $17 per share set out in a formal evaluation by TD Securities Inc. as of Nov. 12.

The termination fees also have been increased. Dorel must now pay $15.6 million if Cerberus chooses not to exercise its right to match a superior proposal,  up from a break fee of $14.1 million. The break fee the buyer must pay if it does not close the deal has been raised to $26 million, up from $23.6 million.

Dorel shares climbed 94 cents to $15.80 in early afternoon trading on the Toronto Stock Exchange on Monday.

Dorel will hold a special meeting of shareholders on Feb. 16 to vote on the proposed deal.

Investment firm Letko, Brosseau and Associates Inc., which controls 12.5 per cent of Dorel's class B subordinate shares, said last week that it planned to vote against the plan that it described as "opportunistic and significantly undervalues the company.

It called TD's valuation as too conservative. It pointed out that TD's analysis based on the value of comparable previous transactions put the equity value between $14.22 and $23.54 per share, or a midpoint of $18.88.

Letko couldn't be immediately reached for comment about the increased offer.

Cerberus is a private equity company that specializes in investing in distressed companies.

Dorel makes a variety of consumer goods such as Cosco and Safety 1st child car seats, Cannondale and Schwinn bicycles, and home furniture under brands such as Dorel Living and DHP.