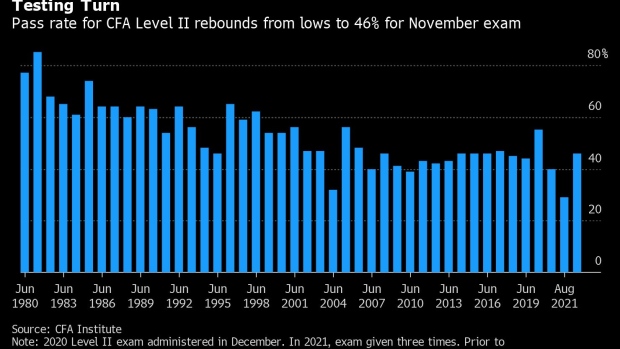 (Bloomberg) -- The pass rate for the second level of the chartered financial analyst exam bounced back from historic lows set last year.

In November, 46% of candidates passed the Level II exam, up from 29% in August, according to the CFA Institute. That’s a bit above the 10-year average pass rate of roughly 45% for that level.

The latest results contrast what had been historically low pass rates across all levels of the CFA exam earlier in 2021. The institute cited disruption from the pandemic as a reason for the trend.

“We are pleased to see the Level II pass rate for the November exam series within historical norms,” Peg Jobst, managing director for credentialing at the institute, said in a statement. “We understand how difficult this period continues to be for candidates, with many having taken their exam following an earlier deferral necessitated by the pandemic.”

The Level II exam consists of vignettes with 88 multiple-choice questions and takes about four and a half hours to complete. Passing all three CFA levels can lead to higher salaries and better job opportunities for finance-industry workers. On average, candidates study more than 300 hours for each of the three exams and take four years to complete the series.

The number of test-takers increased in November from a recent low of 10,000 candidates in August. This time, more than 18,000 candidates sat for the Level II exam, which was administered at 529 computer-based testing centers around the world.

The CFA has shifted to more-frequent and digitally administered exams. Candidates who had deferred their test were able to take exams in 2021, Jobst said in the statement. The institute expects more will take the tests in the coming months as four examination windows are put in place for 2022, she said.

Last week, Level I candidates got their results, with a 27% passing rate for those who took the exam in November, slightly up from 26% in the previous testing period. Level III test-takers are set to receive their results on Feb. 3.