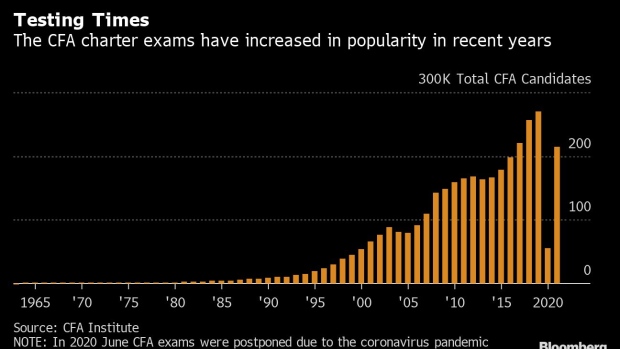 (Bloomberg) -- Fund managers with a Chartered Financial Analyst qualification are less likely to perform well over long time periods than those who haven’t taken the famously tough exams, according to a study.

Researchers looked at the careers of more than 6,000 managers and found that persistent performance was more likely in portfolio managers without a CFA charter, and experience in the market was more closely aligned with a manager’s skill.

“Some of the more experienced guys probably don’t have the CFA designation because they’re older,” Andrew Clare, a professor at Bayes Business School, City University of London, said in an interview. “So you could imagine that CFA designation is kind of a proxy for, not inexperienced, but less experienced managers.”

Researchers from Bayes and Cork University Business School examined 6,291 U.S. equity mutual fund managers’ careers, tracking their performance across various funds and companies as well as examining factors such as gender, qualifications and whether the manager was invested in the fund. Previous similar studies have looked mostly at managers’ performance while working for particular funds.

While the CFA charter wasn’t linked to long-term success, the study did find more persistence among managers who came from universities with higher entry requirements and studied more technical degrees like math and physics.

The CFA is one of the most hard-won qualifications in finance, with pass rates for the first level dipping as low as 22% for July last year. Passing all three CFA exams can lead to higher salaries and better job opportunities. Candidates on average study 300 hours for each level and take four years to complete the series.