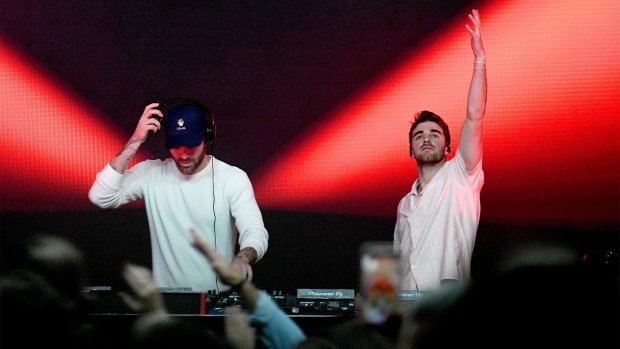 (Bloomberg) -- Pop music duo the Chainsmokers plan to release nonfungible tokens that will give fans a cut of the streaming royalties from their new album, “So Far So Good.”

The 5,000 NFTs will be given out for free on May 17, with a VIP list made up of frequent concert ticket buyers and other superfans getting early access. Holders are entitled to a collective 1% of the “So Far So Good” royalties, the group announced Thursday.

It’s a tenuous moment for NFTs, which have been hit hard by a rout that’s also punished cryptocurrencies. Blue-chip NFT collections like Bored Ape Yacht Club have seen prices plummet in recent days.

But the Chainsmokers’ NFTs, which are based on the Polygon blockchain, offer actual perks to fans. That may may help them stand out from other tokens, said Drew Taggart, one of the group’s members. In addition to the share of royalties, the NFTs will offer priority access for concert tickets and free merchandise.

The approach also will help the group reconnect with fans, he said in an interview. The new album, due on Friday, will be the Chainsmokers’ first in more than two years. “We’ve been very fortunate to have global success, but at some point felt really disconnected from our fan base,” Taggart said.

The music industry is no stranger to crypto. There are projects like Audius, a decentralized music streaming service based on blockchain. Indie band the Kings of Leon released their last album as an NFT. Artists like DJ Steve Aoki and rapper Snoop Dogg have also embraced these tokens.

But NFTs haven’t taken off in the music world the way they did in gaming and digital art, two categories that dominate the leaderboards for popular NFT collections. That may be because some artists simply see NFTs as digital goods, according to Taggart.

“Being able to give your fans ownership in your actual album and participate in streaming royalty revenue is a really interesting case,” he said.

Taggart and bandmate Alex Pall, are already well-versed in the world of crypto through their venture firm, Mantis, which formed last year with the goal of investing $50 million in startups. The fund has backed crypto companies like MoonPay, Magic Eden and Mythical Games.

Pall said in an interview that he and Taggart are interested in web3, a decentralized version of the internet, because it returns value and ownership to users. He said the NFTs also help shed light on disparities in the music industry. The Chainsmokers are entitled to a 7.5% cut from secondary sales of the NFTs, but the group is donating those profits to the album’s songwriters, a role they said is often underpaid in the music industry.

It’s too early to tell what kind of profit the NFT holders could get from their royalties cut, according to Pall. However, holders may not want to hold their breath in hopes of a big payday.

“In some ways, it’s an experiment to show people how little money is generated sometimes across the board in the music space, due to licensing rules and copyright laws,” Pall said.

For their NFT drop, the Chainsmokers partnered with Royal, a startup that wants to change the relationship between music artists and their fans. The company’s chief executive officer, Justin Blau, used to feature the Chainsmokers as an opener when he performed as a DJ under the moniker 3LAU. He’s also sold his own music NFTs, making a $12 million from auctioning off a trio of them last March.

He and co-founder JD Ross launched Royal almost a year ago with the goal of making it easier for fans to invest in artists. The company helps musicians develop and sell NFTs that give fans a share of streaming ownership. It raised $55 million in Series A funding in November and has seen users spend more than $1 million on the platform since an NFT release with rapper Nas in January.

Blau said in an interview that fans often receive their royalties biannually. NFT holders can also make money off of secondary sales and can list their assets on other marketplaces like OpenSea. He noted that the NFTs sold on Royal are referred to as “limited digital assets.”

For Blau, these assets give holders actual ownership of the songs they love, which he said is more meaningful than simply possessing a copy of them.

“No one necessarily brags about owning a CD,” he said.