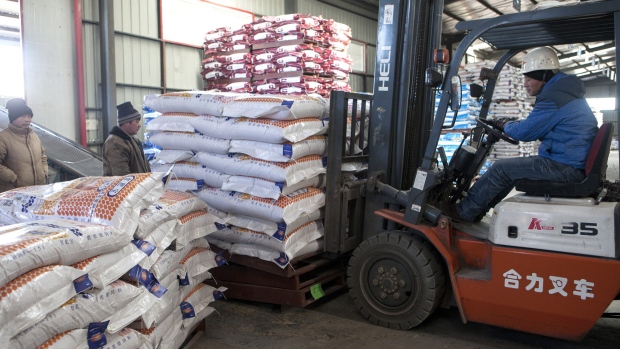 An employee operating a forklift moves a stack of hog feed at the Tianjin Tianjiao Group feed mill in Tianjin, China, on Friday, Feb. 2, 2018. China is the biggest buyer of American soybeans, picking up about a third of the entire U.S. crop, which it uses largely to feed 400 million or so pigs. , Bloomberg

(Bloomberg) -- The odds of a U.S.-China trade deal are rising because both sides have a clearer sense of each other’s goals and intentions, a former Chinese trade official said ahead of negotiations in Beijing next week.

“I’m optimistic about the outcome,” said Wei Jianguo, who was vice trade minister until 2008. Both sides “have done their homework for the negotiations” and “sent positive signals,” he told Bloomberg in an interview, adding that he anticipates a deal that includes specific agreements.

China won’t negotiate on anything that threatens its “core national interests," Wei said. “These core interests are sovereign integrity, national security including in cyberspace, energy and food security, as well as the right to development.”

The core U.S. concern appears to be its place at the top of the international world order, and “China has made clear that we will not challenge the U.S. role as the global leader," Wei said.

Wei is now a vice chairman of the China Center for International Economic Exchanges, a Beijing-based think tank that’s home to a number of retired senior officials. The institution sometimes acts as a liaison for unofficial communications between China and the U.S.

Trade officials from the two countries are set to sit down in Beijing next week for the first face-to-face negotiation since President Donald Trump and his counterpart Xi Jinping agreed to a 90-day truce in their trade war last month.

--With assistance from Karen Leigh.

To contact Bloomberg News staff for this story: Miao Han in Beijing at mhan22@bloomberg.net

To contact the editors responsible for this story: Jeffrey Black at jblack25@bloomberg.net, Sharon Chen, Brendan Scott