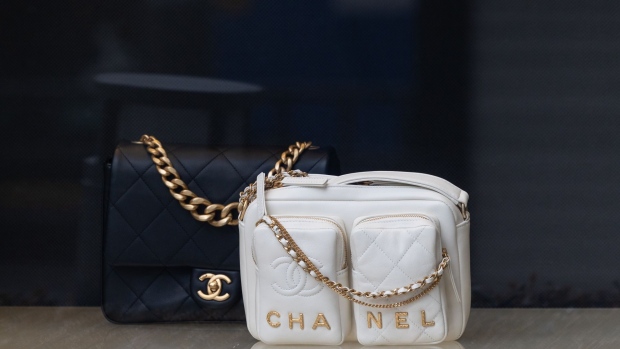 Handbags displayed in a Chanel SA store window at the Avenuel department store, operated by Lotte Shopping Co Ltd., in Seoul, South Korea, on Tuesday, Dec. 14, 2021. South Korea is now the seventh-largest market for luxury brand items, amounting to about $14.2 billion in sales this year, up 4.6% from 2020, according to a report by Euromonitor International. Photographer: SeongJoon Cho/Bloomberg , Bloomberg

The family behind Chanel pocketed a US$5 billion windfall last year as surging global demand for its luxury products lifted one of the world’s biggest multigenerational fortunes to new heights.

The Wertheimer family’s Cayman Islands-based holding company for Chanel received two US$2.5 billion dividends in 2021, according to UK filings. It’s the biggest annual payout from the retailer of No. 5 perfume and little black dresses since it started publishing financial accounts.

The net worth of the Wertheimers, who own London-based Chanel, has soared 37 per cent this year to US$90 billion, according to the Bloomberg Billionaires Index, after price increases helped the luxury-goods purveyor surpass pre-pandemic profit levels in 2021. Brothers Alain, 73, and Gerard, 71, are credited with owning equal shares of the closely held company.

A representative for Chanel referred to the company’s 2021 results and declined further comment.

Global demand for Chanel-branded products has surged over the past two years along with their price tags. Its small classic flap bag was selling for US$8,200 in the US in December, up 60 per cent from November 2019, while customers at its Paris store were limited to buying one bag at a time with a two-month wait before purchasing another. Shoppers in Seoul lined up outside a Chanel boutique at 5 a.m. for the chance to snag a US$9,500 purse.

For the Wertheimers, the most recently disclosed payout makes up more than half of the roughly US$8 billion Chanel has dispersed in total dividends since the start of 2016, according to data compiled by Bloomberg.

The windfalls have helped the brothers diversify their fortune beyond luxury goods.

Their family office, Mousse Partners, has been run for more than two decades by Charles Heilbronn, half-brother of Alain and Gerard. The New York-based firm invests in private equity, real estate and credit. Since 2020, it has bought stakes in early-stage companies including communication platform MessageBird, caterer Butler Hospitality and fitness firm Tonal.

The latest windfall also highlights how some of the world’s richest people protect their wealth. The Cayman Islands doesn’t impose taxes on dividends for local businesses, while the UK doesn’t typically levy withholding taxes on dividends paid from a British firm to another overseas.

Chanel paid about US$1.4 billion of income taxes during 2021, more than double the sum for the previous 12 months.

The company is looking to invest US$1 billion this year and plans to hire more than 3,500 workers across its retail, manufacturing and creative units, Chief Financial Officer Philippe Blondiaux said in an interview last month.

The Wertheimer family founded Les Parfums Chanel in 1924 to make and distribute fashion designer Coco Chanel’s No. 5 fragrance. Alain and Gerard have been credited with owning the Chanel empire since the death of their father, Jacques, in 1996, but they prefer to keep out of the spotlight.

“We’re a very discreet family," Gerard Wertheimer whispered to a reporter before a 2001 fashion show in Paris. "We never talk.”