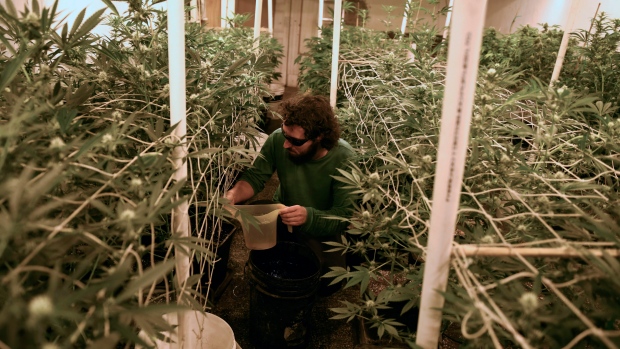 In this June 6, 2018 photo, an employee of the El Piso cannabis club waters their marijuana plants, in Montevideo, Uruguay. In Uruguay the law allows the growing of pot by licensed individuals and the formation of growers and users clubs. , The Canadian Press

States like California and Colorado may grab all the headlines when it come to cannabis, but it’s Oklahoma’s medical market that’s seeing the fastest growth in the U.S.

This year, the state has added an average of 13,425 new medical cannabis users per month -- “a number that no other U.S. market has come close to,” according to cannabis research firm BDSA. In fact, Oklahomans bought more medical marijuana in the first half of this year than in all of 2019, according to tax collection data. BDSA now sees the state’s sales reaching US$1 billion by 2022, a 14 per cent jump from the firm’s April forecast.

This growth is being driven in part by light-touch regulation that makes it much easier to start a medical marijuana dispensary than in other parts of the U.S. While medical cannabis was only legalized after a state referendum in 2018, BDSA sees nearly one in 10 Oklahomans -- almost 400,000 -- carrying the cannabis cards that let them shop at dispensaries by the end of the year.

That’s a far cry from the next busiest U.S. medical market, New Mexico, with just 5.3 per cent of its population seen having access to cannabis by year end.

“This is one of the most interesting markets in the country,” said Peter Barsoom, who opted to expand his Colorado-based edibles brand 1906 to Oklahoma, instead of a state like Oregon or California.

While Oklahoma’s market is technically medical only, the state makes cannabis easy to obtain. Any adult with a physician’s signature qualifies for a marijuana patient card. That contrasts with states like Minnesota, which spells out the specific conditions that are required.

The state also allows cannabis in all its forms, from edible gummies to sprays and vaping products.

It’s not just Oklahoma where usage is growing. The pandemic has sparked greater cannabis use across the country, with Curaleaf Holdings Inc. Chairman Boris Jordan reporting in July demand is at an all-time high and the consumer base is expanding.

Overall, individual states have become more important to cannabis companies, and markets like Virginia, Utah and West Virginia are expected to be some of the fastest growing in the next year. Some recreational markets are also experiencing accelerated growth as marijuana laws relax across the country. But among those allowing medical use, Oklahoma stands out.

There’s a flip side to Oklahoma’s light regulatory hand. The state doesn’t place any limits on the number of dispensary licenses it issues, unlike some other states, and dispensary startup fees of US$2,500 are among the nation’s cheapest. These loose regulations mean there’s been a flood of new players, and some fear saturation.

Keith Laird, who moved from Denver two years ago to open Okie Kush Club in Norman, Oklahoma, said it’s the easiest state to open a dispensary. But “it’s the toughest state, though, once you’re open, to be successful,” he said, citing the crowded marketplace.

As of January, Oklahoma had more than 2,200 medical dispensaries. While comparisons with other states are complicated by varying rules on medical and recreational use, only Oregon had more outlets per capita at the beginning of the year. But there’s already been some thinning of the herd in Oklahoma, with the count since falling to 2,073 as of Aug. 3.

For cannabis producers supplying the state’s market, the key to Oklahoma is finding the most profitable dispensaries while simultaneously expanding widely enough to generate name recognition, 1906’s Barsoom said.

“Chaos breeds opportunity,” said Allison Krongard, co-founder of Her Highness, which sells luxury cannabis accessories for women. However, the rapid growth isn’t going to last, she said. “Once it all shakes out, I’m sure it will not be so free flowing.”