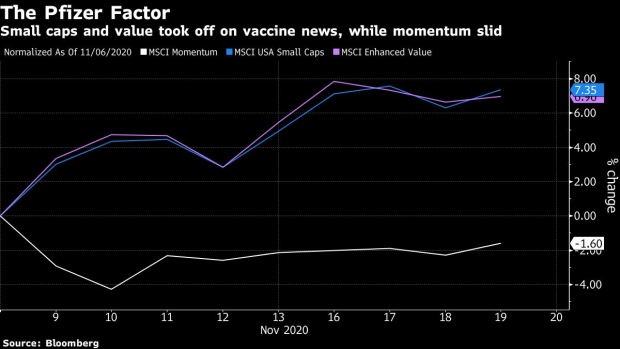 A mandatory mask sign near the Pfizer Inc. facility in Puurs, Belgium, on Tuesday, Nov. 10, 2020. A vaccine developed by Pfizer Inc. and BioNTech SE protects most people from Covid-19, according to a study whose early findings sent stock prices surging and were hailed by the top U.S. infectious-disease specialist as “extraordinary.” Photographer: Geert Vanden Wijngaert/Bloomberg , Bloomberg

(Bloomberg) -- The sun was just rising over New York on Nov. 9 when an announcement from Pfizer Inc. set in motion what would be one of this year’s heaviest days of volume in the U.S. stock market -- and one of the most shocking sessions in recent memory for the quants who trade in it.The surprising success rate of a coronavirus vaccine trial from Pfizer and its partner triggered a massive reaction in stocks. For investors who carve the equity market into assorted characteristics that drive the performance of share prices, it looked like this: Factors such as momentum and growth that had helped lead this year’s rally were crashing, while under-performing groups like value and small caps were soaring. Could the vaccine be a complete game changer -- the catalyst to start a reversal in the types of equity factors that perform the best?Not so fast, says an executive at one of the most-influential companies in this realm of investing. Yes: certain factors did play a role in the massive outperformance of small caps that day. But contrary to popular belief, none of them were the “size factor,” the one everyone believed was driving the surge in smaller companies, according to Roman Kouzmenko, executive director of core equity research at MSCI Inc. Likewise, the value factor had little to do with a surge in a gauge of value stocks.

“The simplest explanation isn’t always the right one,” he wrote in a blog post describing his analysis of small caps, which used equity risk models and other analytical tools.

With the MSCI USA Small-Cap Index up more than 3% and the S&P Small Cap 600 Index jumping almost 5% in the session after Pfizer’s announcement, the simplest explanation would be that the size factor was suddenly back in vogue.

Yet Kouzmenko determined the rally in MSCI’s small-cap guage was owed to other factors also exhibited by the group, such as that they are riskier, less-profitable and lower-quality stocks that tend to move up and down more than the market. And they are not typically among the momentum factor that was suddenly out of favor that day. The outperformance in the MSCI USA Enhanced Value Index was also a result of what he calls a negative exposure to momentum.

“A rules-based, cap-weighted index construction, while having a number of benefits, may result in unintended factor exposures that can suddenly matter a lot when these factors have unusually large movements,” Kouzmenko said in an email.

There is a lot of soul searching going on in the world of factor investing these days, as stories pile up about quantitative funds getting burned as they struggle to navigate through 2020’s wild market swings and ever-shifting expectations for the path of the pandemic and American politics.With year-end approaching, timing bets on future leadership is perilous amid the competing newsflow of positive vaccine developments and a raging virus that’s forcing the return to lockdown type of conditions in the U.S. and Europe.“In the last six weeks, it’s been nearly impossible to capture a single theme and ride it because the market’s flipping back and forth,” said Jonathan Golub, chief U.S. equity strategist at Credit Suisse Group. “That tends to be extremely frustrating for investors with a short-term focus.”Ultimately, the performance of factors this year, indeed most years, is driven primarily by sentiment and the level of risk-taking that the collective market wants to take, according to John Kolovos, chief technical strategist at Macro Risk Advisors.

Yet the economic and market environment of 2020 is such a unique scenario that old playbooks haven’t always been applicable. That’s especially true for the popular momentum factor, which bets that stocks that have performed especially well will continue to do so and those that have been lagging will keep on lagging. Historically, the momentum factor tended to do well in both bull and in bear markets but almost always crashed coming out of major market bottoms, according to Kolovos.“This time around, however, the momentum factor did not crash coming out of the Covid bear market, instead, it continued to perform well,” he said. With little clarity toward the path of the virus and eventual rollout out of a vaccine, “people stuck with that they knew about fundamentally, and that was technology, discretionary and communication -- the momentum winners.”

One legacy of 2020 may be a larger focus in factor research on the sudden emergence of transient trends that influence returns. At MSCI, the creator of indexes tracked by many factor-based exchange-traded funds, Kouzmenko and colleagues are on the hunt for ways to incorporate these temporary drivers of return. For example: trying to measure how exactly Covid affected certain stocks or how companies’ ability to adapt to a remote workforce helps drive their share-price performance.

MSCI is in the early stage of research to detect new themes as they emerge and and turn them into factors using machine learning and natural language processing techniques, Kouzmenko said.What factors will carry the baton going forward is obviously what matters the most to investors at the moment. At Credit Suisse, Golub’s research has identified a handful of key factors that have worked the best this year – across all industries, and not just the stay-at-home names in big tech and internet businesses. They include high gross margins, strong sales growth, high return on assets and low levels of leverage. Golub shorthands that group of characteristics as “quality growth.”

While these attributes may take a back seat to more cyclical and value-oriented stocks for the rest of the year, Golub believes the factors should reassert themselves in the market leadership eventually.

“There’s no such thing as evergreen,” he said. “But right now, I would say that you’re as close to evergreen as you’re going to get with quality growth.”