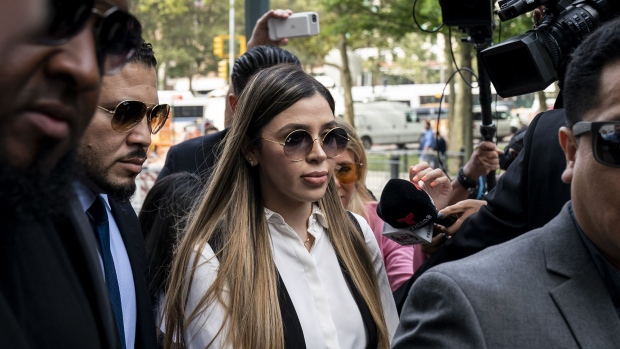 Emma Coronel Aispuro, 31, has been in U.S. custody since she was arrested at Dulles International Airport in Virginia in February, accused of helping her husband operate his multibillion-dollar cartel and aiding his escape from a Mexican prison through an underground tunnel. She pleaded guilty, in federal court in Washington, to conspiring to distribute illegal drugs in the U.S. and to launder money, and to engaging in transactions with a foreign narcotics trafficker.

Coronel admitted working for the drug empire in a scheme that ran from 2007 to the end of 2019. Guzman was convicted of engaging in a continuing criminal enterprise, as well as on drug trafficking and firearms charges, as leader of the Sinaloa Cartel.

Coronel, a former beauty queen and the mother of the couple’s twin daughters, married Guzman when she was 17. Her father, Ines Omar Coronel Aispuro, was himself a member of the cartel, according to U.S. prosecutors. A Mexican court sentenced him in 2017 to more than 10 years in prison for marijuana trafficking.

Emma Coronel was originally charged in a one-count criminal complaint that alleged she conspired to distribute drugs for unlawful importation into the U.S. Federal prosecutors also initially alleged that she tried to help Guzman escape from another Mexican prison before his January 2017 extradition to the U.S. El Chapo was convicted by a federal jury in Brooklyn, New York, in 2019.

Coronel will remain in custody until her Sept. 15 sentencing.