Charles Schwab Corp. agreed to buy TD Ameritrade Holding Corp. for about US$26 billion in a deal that will reshape the retail brokerage business.

TD Ameritrade stockholders will receive 1.0837 Schwab shares for each TD Ameritrade share, the companies said in a statement Monday. That’s a 17 per cent premium based on the average share price as of the close on Nov. 20.

Announcement of the deal comes after news of an acquisition broke on Thursday, sending up shares of both firms. Schwab, America’s original discount broker, will now have even more sway over the sector it pioneered nearly a half-century ago.

“Our view is that this is a great deal for the consumer,” Schwab Chief Executive Officer Walt Bettinger said on a conference call Monday with analysts. “We’ve been doing nothing but driving costs down for decades.”

The equity value of the deal is US$28.3 billion based on Schwab’s closing price of US$48.20 on Nov. 22. Schwab shares fell 0.3 per cent at 10:16 a.m. in New York trading. TD Ameritrade, the Omaha-based brokerage that’s partly owned by Toronto-Dominion Bank, rose four per cent.

The tie-up creates a mega-firm with US$5 trillion in assets — a Goliath that may attract the attention of antitrust regulators, analysts say. Smaller brokerages like E*Trade Financial Corp. will have to contend with a much more formidable competitor.

The combined firm will relocate its headquarters to Schwab’s new campus in Westlake, Texas. Schwab’s San Francisco operations will remain a sizable hub.

TD Bank, which holds 43 per cent of TD Ameritrade, will own roughly 13 per cent of the new business. Its voting stake will be limited to 9.9 per cent, with the rest of its position in a non-voting class of stock. The Canadian lender will have two new seats on the combined firm’s board, while TD Ameritrade will name a single director. 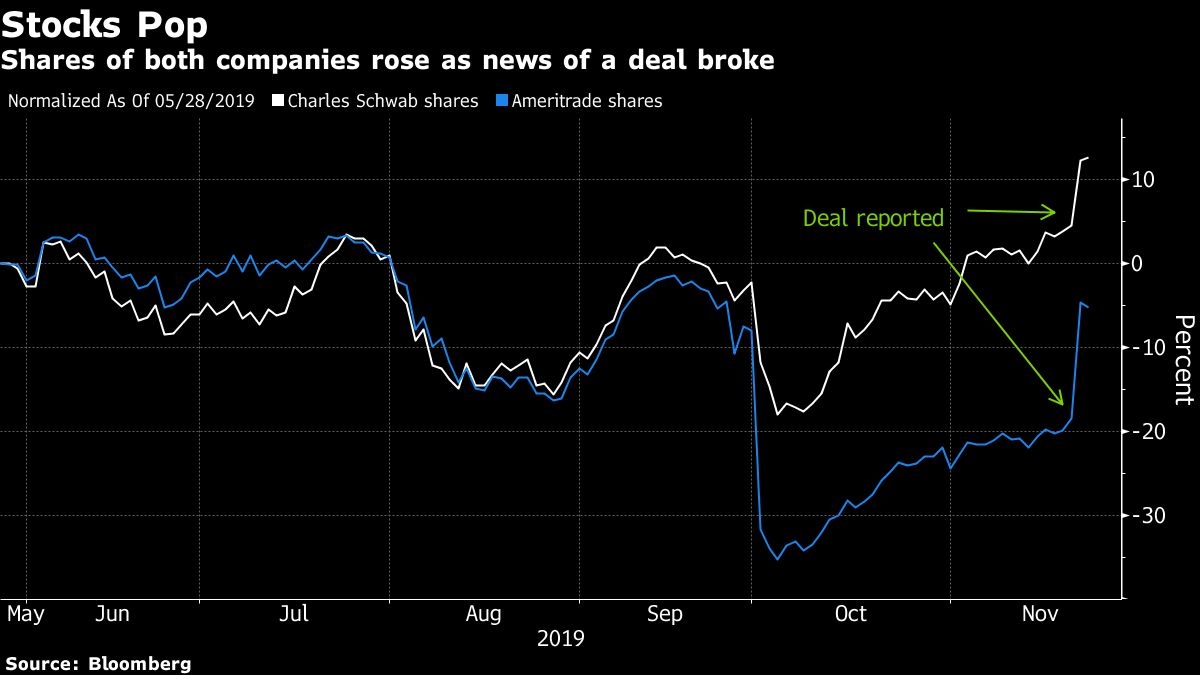 As a result of the deal, Schwab will see its business add 12 million client accounts, US$1.3 trillion in assets, and roughly $5 billion a year in revenue.

Bettinger downplayed the potential antitrust risks of the combination.

“We have numerous competitors, many of which are far larger than us today and far larger than a combined organization,” he said on the call. “They’re going to continue to come right after us, as they are now in all aspects of the business.”

Schwab said in the statement that the new firm will have “the resources of a large financial services institution that will be uniquely positioned to serve the investment, trading and wealth management needs of investors across every phase of their financial journeys.”

Schwab last month eliminated commissions for U.S. stock trading, forcing other brokerages to follow suit and sweeping away an important revenue stream. Analysts speculated that online brokerages might have to cut deals to survive the increased industry pressure.

TD Ameritrade has relied more on commissions than some competitors, drawing 36 per cent of its net revenue from commissions in 2018, compared to seven per cent at Schwab.

Founder Charles Schwab hinted he was open to dealmaking in an interview with Bloomberg Radio in October.

“I don’t know whether we’ll be successful in that pursuit, but in the industry you’re going to see more consolidation, more firms getting together,” he said. “You just have to have that scale and volume.”

If the deal goes through, the combined company will have unparalleled clout as top custody service providers to independent financial advisers. That may give authorities pause, Keefe, Bruyette & Woods analyst Kyle Voigt wrote Thursday. He estimates Schwab has about a 50 per cent market share of registered investment adviser custody assets, while TD Ameritrade may have as much as 20 per cent.

The acquisition comes after TD Ameritrade announced in July that CEO Tim Hockey would leave early next year. Hockey denied at the time that his departure had anything to do with a potential deal.

--With assistance from Matthew Monks.