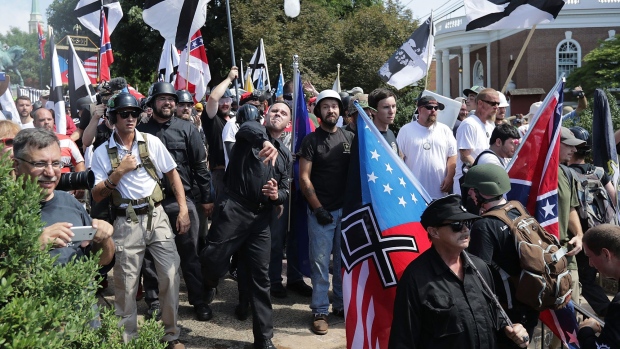 CHARLOTTESVILLE, VA - AUGUST 12: Hundreds of white nationalists, neo-Nazis, KKK and members of the "alt-right" hurl water bottles back and forth against counter demonstrators on the outskirts of Emancipation Park during the Unite the Right rally August 12, 2017 in Charlottesville, Virginia. After clashes with anti-facist protesters and police the rally was declared an unlawful gathering and people were forced out of Lee Park, where a statue of Confederate General Robert E. Lee is slated to be removed. (Photo by Chip Somodevilla/Getty Images) , Photographer: Chip Somodevilla/Getty Images North America

(Bloomberg) -- Right-wing organizers of the deadly 2017 “Unite the Right” rally in Charlottesville, Virginia, asked a judge to move the upcoming trial of victims’ civil lawsuit against them to another city out of fear that violent protesters will attack them with impunity.

City officials have failed to sufficiently discourage protesters who may attend the October trial or clarify past statements identifying the city as the “capital of the resistance,” White nationalist group Identity Evropa and the neo-Nazi Traditionalist Worker’s Party said in a court filing Friday.

“What they have objectively done is roll out a red carpet to anyone, especially anyone of a ‘punch a Nazi’ persuasion, to come to Charlottesville for this trial with the confidence that they are very unlikely to face any serious consequence for even criminal misbehavior,” the groups said.

Lawyer Roberta Kaplan, who filed the suit on behalf of university students, faith leaders and other locals who were harmed in the riot, is expected to file her response later Friday seeking to keep the trial in Charlottesville. U.S. District Judge Norman K. Moon had asked both sides to weigh in on the issue.

Her clients seek unspecified financial damages for emotional distress and other injuries, as well as judgments that the organizers conspired to incite a riot and violently harass protesters based on racial, religious and ethnic animosity.