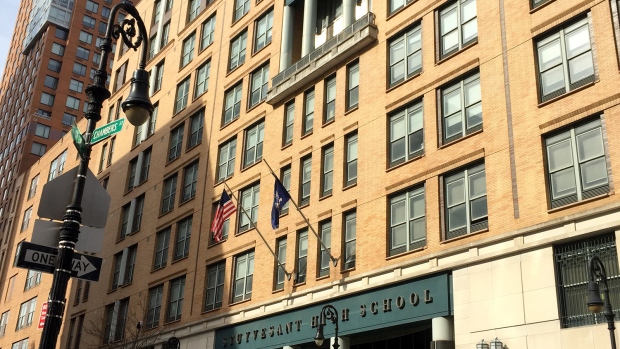 (Bloomberg Opinion) -- The recent college-admissions scandal underscores the importance of having an application process that can’t be gamed. But as high schools in New York City demonstrate, even a process based purely on an incorruptible metric will cause controversy.

New York has eight public high schools where admission is determined by a single entrance exam. Applicants with the highest scores get in — end of story. The schools are as sought after as Ivy League colleges precisely because, with their rigorous curricula and reputation for excellence, they can catapult students to elite institutions.

For years, however, the entrance exam has produced student bodies that are wildly at odds with the city’s ethnic makeup. At the most selective of these schools, Asian students fill almost three-quarters of seats and whites one-fifth, while Hispanics and African Americans account for just 3 percent and 1 percent, respectively.

Outrage over the low numbers of black and Hispanic students is justified. But the solution that many are backing — abolishing the test and exposing the system to the sort of political meddling it is meant to prevent — is all wrong.

The test is not the problem; it’s all those years leading up to it that children spend in classrooms receiving inadequate instruction. Too many children are unprepared for academic and social success by the time they reach high school. No new test scheme and no revised admissions process will repair these failures. Unless they are addressed through genuine elementary- and middle-school reform, high schools will be left to play catch-up, less-than-constructive debates will persist, and too many children will continue to be left behind.

Disparate educational outcomes are a problem not just in New York City, but across the nation. The white-black achievement gap in eighth-grade reading nationwide in 2017 was 25 percentage points and, in math, 32 points. For Hispanics, the gaps were roughly three-quarters as large.

Unfortunately, cities and states have been moving to limit a change that has proved to be one of the most effective ways of closing these gaps: charter schools. Restricting the number of public schools that are granted charters to operate independently only limits the possibilities of students — and in urban areas, the toll falls heaviest on black and Hispanic children.

New Orleans, which moved almost entirely to charter schools after Hurricane Katrina, illustrates their promise: Though the system is far from perfect, rates of high-school graduation, college attendance and college persistence have all increased since the shift to charters. High-performing charter schools in New York and other cities have also outperformed traditional schools.

Critics charge that charters divert resources from public schools. Never mind that charters are themselves public (and often receive less in per-pupil funding than traditional schools). The real objection is that most charters are not bound by union contracts — even though some charters pay higher than average salaries, in exchange for more work and greater accountability.

Allowing failing and substandard schools to persist can impose lifetime sentences on children. Charters offer a way to spare some children that fate. States should allow them to expand, while also doing more to inject excellence into traditional schools.

That means recruiting talented principals and teachers and making it possible to remove those who — after receiving professional development — do not make the grade. It’s also essential to offer salaries and working conditions appealing enough to keep them in their jobs.

Until these and other changes are made, and K-8 education is improved, the racial achievement gap will persist — and debates over admission policies will continue to miss the mark.