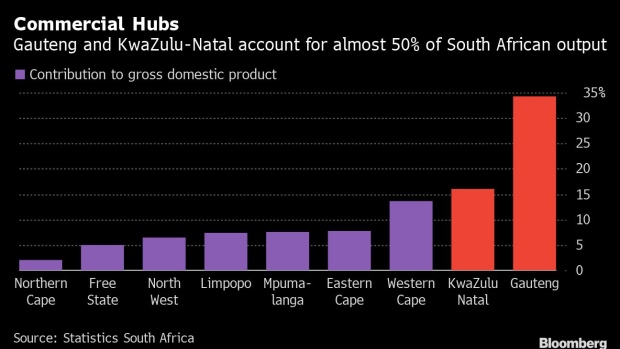 Inflation continues to pick up in the U.S. and U.K., China’s economic rebound is benefiting from firmer consumer spending, and violent unrest in two key provinces is hampering efforts to revive South Africa’s economy.

Prices paid by consumers surged in June by the most since 2008, topping all forecasts and testing the Federal Reserve’s commitment to sticking with ultra-easy monetary support for the economy. Excluding the volatile food and energy components, the so-called core consumer price index rose 4.5% from June 2020, the largest advance since November 1991.

Consumer sentiment unexpectedly declined to a five-month low in early July as mounting concerns over rising prices led to a sharp deterioration in buying conditions for big-ticket items.

U.K. inflation unexpectedly accelerated to the highest level in three years in June, driven by widespread price increases that challenge the Bank of England’s argument that the surge will be temporary.

The European Central Bank helped remove some of the ambiguity around its policy objectives by adopting a simple 2% inflation target in its strategy review, but plans to include the cost of owner-occupied housing in the measure add a new layer of uncertainty that could complicate the task of achieving the goal in the years ahead, according to Bloomberg Economics.

China’s economic rebound steadied in the second quarter and showed more balance as consumer spending picked up, providing support to a global recovery being shaken by resurging coronavirus cases.

The Bank of Japan joined the battle against global warming by offering a series of incentives for lenders to help businesses move toward a greener economy, with Governor Haruhiko Kuroda insisting there was no longer any time to waste.

Deadly riots in two key South African provinces have dealt a blow to the recovery of an economy that contracted the most in a century in 2020. Some parts of the country may face food shortages after rioters upended supply chains by looting supermarkets, torching goods trucks and obstructing key roads.

Chile signaled it will continue to raise its interest rate gradually after its first borrowing cost increase in two years, as policy makers weigh a strong economic rebound and risks from new coronavirus strains.

The sudden surge in balseros, or rafters, setting sail from Cuba for the South Florida shore is -- like the spontaneous protests that broke out in Havana last weekend -- a sign that living conditions on the communist island are rapidly deteriorating 16 months into the pandemic.

An overheating economy -- either because demand rebounds faster than expected, supply disappoints, or some combination of the two -- is the fastest route to durably higher inflation. If that occurs, Bloomberg Economics’ general equilibrium models show inflation in the euro area and U.K. moving significantly above expectations. In the U.S., a flatter Phillips curve means a more muted impact.

White House officials are discussing proposals for a digital trade agreement covering Indo-Pacific economies as the administration seeks ways to check China’s influence in the region, according to people familiar with the plans. Asian countries may need some convincing.