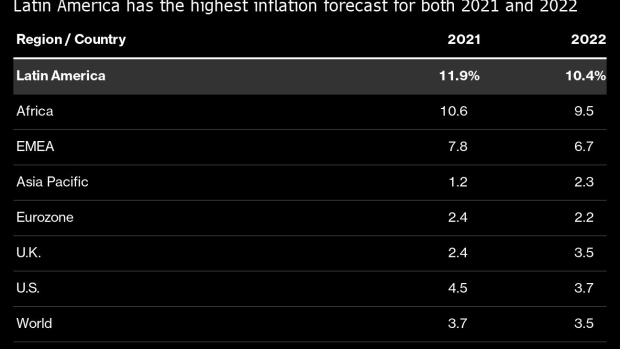 While prices are rising all over the world, the increases are especially striking in Latin America, which has the highest inflation forecast for both this year and next.

U.S. and U.K. inflation metrics recorded multi-decade highs, while big price jumps in New Zealand led the central bank to raise interest rates for the second time in as many months. India’s economy is showing signs of strengthening, while an increase in Covid-19 infections is denting business sentiment in Germany.

Personal spending rose in October from a month earlier by the most since March, while a closely watched inflation measure posted the largest annual increase in three decades. The figures come as some Federal Reserve officials are advocating for a faster tapering of the central bank’s asset-purchase program than initially planned.

The supply crunch that’s helped drive inflation to multi-decade highs shows some signs of easing in the U.S. -– but it’s still getting worse in Europe.

Applications for U.S. state unemployment benefits plunged last week to a level not seen since 1969, which if sustained would mark the next milestone in the labor market’s uneven recovery. However, the larger-than-expected drop was largely explained by how the government adjusts the raw data for seasonal swings.

German business confidence took another hit in November, with a new wave of Covid-19 infections looming over the economy and rising inflationary pressures threatening to weigh on manufacturing. Expectations for the next half year also worsened.

U.K. companies reported the strongest inflation in more than two decades during November, adding to pressure on the Bank of England to lift interest rates as early as this month. IHS Markit Ltd. said 63% of purchasing managers reported increased cost burdens, driving the fastest growth in an index tracking inflation since the report started in 1998.

Singapore expects gross domestic product to expand 3% to 5% next year, a slower pace than this year as its rebound from the worst of the pandemic steadies. The first official forecast for 2022 compares with about 7% this year, the Ministry of Trade and Industry said Wednesday, reflecting the impact from easing pandemic restrictions and a stabilizing global economy.

China pulled back on its already halting progress toward meeting its U.S. trade deal targets, slowing purchases of all types of goods covered by the agreement despite calls from the Biden administration for Beijing to adhere to its commitments.

Price surges are busting through policy makers’ targets in all of Latin America’s major economies, with annual inflation prints this month of 6% in Chile, 10.7% in Brazil and a whopping 52% in Argentina. Consumer prices in Mexico rose 7.05% in the first half of November from a year prior, the highest in 20 years.

India’s economy showed steady signs of strengthening in October as services, manufacturing and exports kept it on course to post the world’s fastest growth.

New Zealand’s central bank raised interest rates for the second time in two months and signaled it will need to tighten policy more quickly than previously expected to contain inflation.