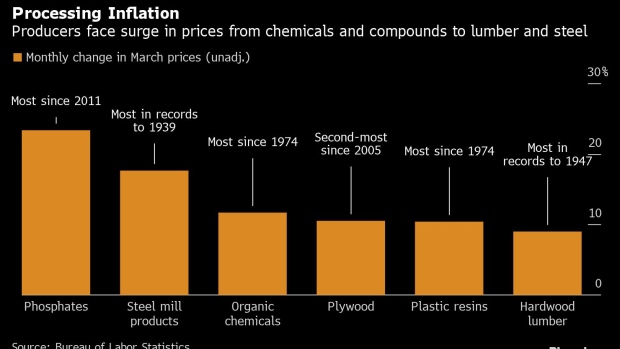 (Bloomberg) -- U.S. retailers have reason for optimism after sales surged in March against a backdrop of increased Covid-19 vaccination rates, robust hiring and government stimulus.

The world’s economic recovery from the pandemic is creating plenty of export demand, benefiting nations such as Vietnam and Indonesia.

Alternative data suggest global economic activity continued its recovery in March and early April, according to Bloomberg Economics’ gauges that integrate high-frequency data such as credit-card use, travel and location information. Advanced economies and emerging markets have trended up at a similar pace. In China, data show some weakness in March and April.

Retail sales jumped 9.8% increase in March, the second-largest advance in government data back to 1992, as an increase in vaccination rates and a fresh round of stimulus checks emboldened shoppers. The figures are consistent with faster economic growth.

Consumer prices climbed in March by the most in nearly nine years as the end of pandemic lockdowns triggered a rebound in travel and commuting that pushed up the cost of gasoline, car rentals and hotel stays.

A below-the-radar data point in the latest producer price index report showed the sharpest monthly spike in processed goods for so-called intermediate demand since 1974. These are goods and materials such as ball bearings, fuel, chemicals, steel and plastics that are used to make other final-demand products like automobiles and household goods.

China’s economy strengthened in the first quarter of the year as consumer spending rose more than expected, putting it on course to join the U.S. as twin engines for a global recovery in 2021.

A surging U.S. economy on the back of massive stimulus and pent-up demand will benefit exporters in Asia, with Vietnam receiving the biggest windfall, according to Bloomberg Economics. If the U.S. growth rate accelerates to 7.7% in 2021 as forecast by BE, up from the 3.5% seen late last year, that would add more than 1 percentage point to Vietnam’s expansion.

The post-Brexit slump in U.K. merchandise trade with the European Union partially recovered in February on improved exports of cars and pharmaceuticals: British goods exports to the EU rebounded almost 47% in February from a month earlier, while imports from the bloc increased 7.3%, data from the Office for National Statistics showed on Tuesday.

Italy’s debt this year will exceed the country’s previous record amassed in the aftermath of World War I, laying bare the debilitating cost of the coronavirus pandemic on the euro-zone’s third-biggest economy.

Brazilian economists raised their year-end expectations for inflation and the key interest rate amid a recent spike in consumer prices.

Imposition of curbs to stem a new wave of the pandemic by Maharashtra, India’s most industrialized state that accounts for about 15% of the national output, is seen holding back recovery in Asia’s third-largest economy.

Belarus raised its key interest rate to 8.5%, increasing borrowing costs for the first time since 2015 and joining emerging-market peers in Russia, Brazil and Turkey, who all hiked rates this year.