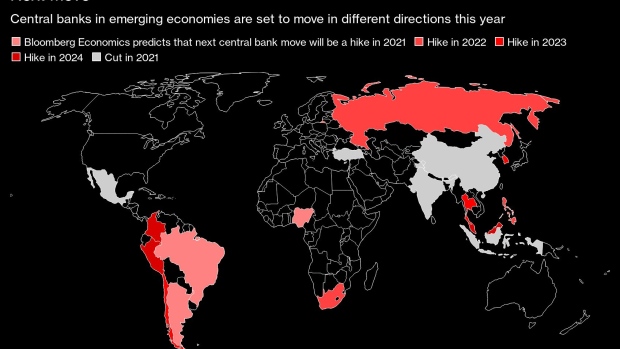 (Bloomberg) -- The American consumer got back in the spending groove last month and factory output rose more than forecast, setting the stage for what could be the best year of economic growth in nearly four decades.

Employment in the euro area improved in final quarter of 2020, though the workforce in Europe and the rest of the world faces structural changes from the pandemic.

The U.S. economy started 2021 with a bang as retail sales accelerated and expectations continued to build for another jolt of government stimulus.

Production at manufacturers rose in January for a fourth-straight month, showing factories continue to recover from pandemic-related disruptions last year.

About 2.6 million people in the U.K., or 8% of workers, expect to lose their jobs in the next three months, according to a survey that suggests long-lasting damage to the economy from the coronavirus.

The euro area added jobs at the end of last year, suggesting businesses are looking beyond the latest economic woes caused by coronavirus lockdowns.

Prime Minister Narendra Modi’s plan to boost capital expenditures to help India regain the fastest-growing major economy title risks being derailed by the nation’s cash-strapped states, which are cutting back on such spending.

One important aspect of Asia’s rebound from the virus shock is how fast consumers spring back after declines last year that were deeper than overall gross domestic product contractions in many economies across the region. Analysis by Bloomberg Economics suggests it won’t be an easy recovery.

The central banks of Zambia and Zimbabwe increased their benchmark interest rates this week. Together with neighboring Mozambique, which hiked last month, they are the only monetary policy authorities globally to raise borrowing costs in 2021.

Other emerging-market central banks may follow Africa’s example: Turkey already switched from substantial easing to aggressive tightening midway through 2020 -- Argentina, Brazil and Nigeria are also set to take hawkish turns this year, according to Bloomberg Economics.

Over 100 million workers in eight of the world’s largest economies may need to switch occupation by 2030 as the Covid-19 pandemic accelerates changes to the labor force, according to research by McKinsey.

Mounting concern about a global chip shortage flags the possibility that industry faces a supply-chain crunch. With automakers particularly at risk, countries like Germany and Mexico stand out as most exposed among major economies, according to calculations by Bloomberg Economics.