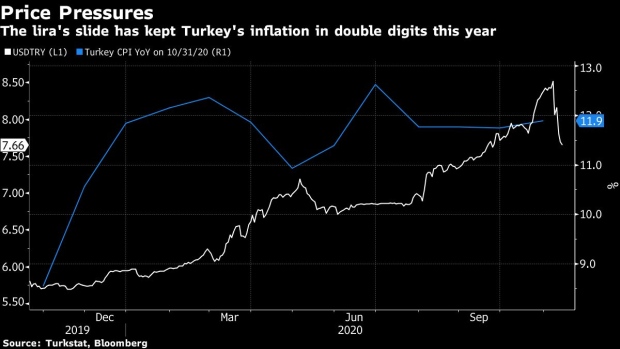 Pedestrians walk along stairways in the Chaotianmen Docks area in Chongqing, China, on Tuesday, July 28, 2020. China's economy, the first to succumb to the coronavirus, is proving to be the fastest to recover. An industry-powered rebound is pushing the Asian nation out of the historic first-quarter slump and toward being the only major economy to expand this year. Photographer: Qilai Shen/Bloomberg , Bloomberg

(Bloomberg) -- Several of Asia’s largest economies and a dozen others in the region are forming a new trade bloc aimed at knocking down barriers to commerce at the same time the U.S. finalizes a probe on digital services taxes by a few European nations that could spark retaliation by the Trump administration.

Meanwhile, Vietnam hopes to reset its trade relationship with the world’s largest economy in the wake of American tariffs. And, in an effort to skirt U.S. levies on European-made jets, Delta Air Lines Inc. has been taking delivery of Airbus SE planes and basing them overseas.

China’s surging economy is set to overtake 56 countries in the world’s per-capita income rankings during the quarter-century through 2025, according to data analyzed by Bloomberg from last month’s IMF World Economic Outlook. By that date, China will rank 70th in the world on the metric, putting it close to joining the richest one-third of nations.

The signing of the Regional Comprehensive Economic Partnership by China, Japan, South Korea and 12 other Asia Pacific states over the weekend paves the way for a reduction in trade barriers at a time that the Covid-19 pandemic pose challenges to global commerce. The RCEP deal may support a relatively faster recovery for its members, particularly China, according to Bloomberg Economics.

France‘s second lockdown will push the economy back into a slump and slow the recovery in 2021, even though restrictions to contain the coronavirus aren’t as severe as earlier in the year.

The U.S. will soon issue the results of probes into Austria, Italy and India’s decisions to tax local revenue of Internet companies such as Facebook Inc. and Alphabet Inc.’s Google, which could pave the way for retaliatory tariffs.

Delta is sidestepping millions of dollars in U.S. tariffs on European jetliners by initially routing them to such places as Amsterdam, Tokyo and El Salvador. The U.S. carrier has taken delivery of seven Airbus planes since Donald Trump’s levies took effect in October 2019, and rather than flying them home as it had in the past, has based the aircraft overseas.

America’s housing market continues to defy expectations. Sales of previously owned homes rose in October to near a 15-year high. The annualized pace is less than 6% from a record. Ultra-low mortgage rates have helped supercharge demand, depleting inventory and driving selling prices to an all-time high.

Turkey’s central bank took a major step back toward mainstream policy making with the tacit endorsement of longtime skeptic President Recep Tayyip Erdogan, raising interest rates by the most in over two years and spurring a rally in the currency.

Vietnam was among the biggest beneficiaries of the U.S.-China trade war as global companies added investments to diversify their supply chains. But its own swelling surpluses with the U.S. saw it slapped with tariffs and accused of currency manipulation. Now, it’s is looking to reset its volatile relationship with the U.S.

The latest readings of Bloomberg Economics’ alternative, high-frequency data suggest a stabilization of economic activity in Europe, following the sharp drop earlier in November amid a stark rise in Covid-19 infections and expanding lockdown measures. Activity in the U.S. and Canada continued to move sideways, while Japan is the only bright spot among advanced economies.

The World Trade Organization said the strong rebound in global trade during the third quarter may slow in the closing months of the year as nations battle a resurgence of the Covid-19 virus.