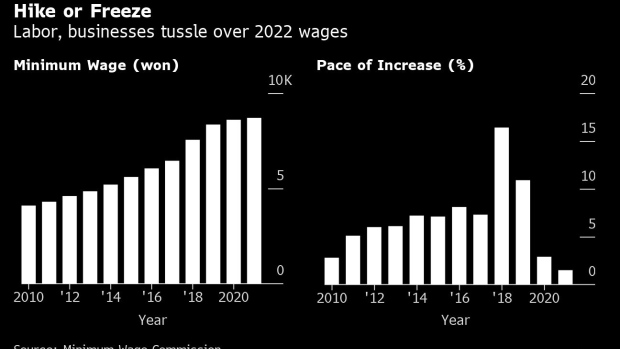 (Bloomberg) -- Job openings in the U.S. stand at a record high against a backdrop of robust economic growth, the global chip shortage is constraining factory output in Germany and inflation is showing signs of settling back in China.

In Latin America, central banks are under pressure to raise borrowing costs because of higher inflation. The World Bank projects food prices are set for the largest annual gain in a decade.

Job openings rose to a fresh record high in May, underscoring persistent hiring difficulties and reflecting more vacancies in the health care, education and hospitality industries. The availability of vaccines paired with a broader reopening of the economy has spurred a snapback in economic activity in recent months, but businesses’ ability to hire remains limited.

The European Central Bank took a step in the Federal Reserve’s direction with its new inflation target of 2%, while stopping short of a similar commitment to let the economy run hot after a recovery. The ECB’s biggest strategic rethink since the creation of the euro -- a classic European compromise with unanimous approval from policy makers -- sets the terms of engagement for a half decade of monetary debates.

The global chip shortage took a toll on the U.K. economic recovery in May, disrupting manufacturing and sending car and truck production plunging at one of its fastest rates on record. Growth in the overall economy slowed to 0.8%, about half the rate expected, the Office for National Statistics said Friday.

The global demand surge following the end of coronavirus lockdowns is mixed news for German manufacturers, as several indicators are highlighting their continued struggles with unprecedented supply-chain issues. Strong demand points to better days ahead for factories, but the sector is unlikely to contribute much to growth this quarter, according to Bloomberg Economics’ Maeva Cousin.

China’s factory inflation peaked and started to ease in June as a stronger dollar and government measures helped to cool commodity prices. The producer price index rose 8.8% from a year earlier after jumping 9% in May, the National Bureau of Statistics said Friday. Also on Friday, China’s central bank cut the amount of cash most banks must hold in reserve in order to boost lending and bolster an economic recovery.

Hong Kong’s emerging recovery from an historic recession fueled by the pandemic and political protests is throwing into stark relief the deepening wealth imbalances between the city’s working class and elite.

The minimum wage is hotly contested every year in South Korea. This year the issue is more fraught than usual. Businesses say they can’t afford to pay much more after the drubbing they took during the pandemic. Workers say the crisis has already put off long-overdue raises and has made inequality worse.

The world’s deepest precious-metals mines, together with giant iron-ore and coal pits are providing an unexpected boon to a South African economy slowly recovering from its biggest contraction in a century. The South African Reserve Bank, however, forecasts that the commodities price rally may be temporary.

India supercharged its economy 30 years ago, triggering one of the biggest wealth creations in history and setting the stage for Prime Minister Narendra Modi’s ambitions of growing it into a $5 trillion behemoth by 2025. Then the coronavirus hit, unwinding decades of progress in just months.

International food prices are set to rise 12% this year, according to the World Bank. That’s the fastest annual increase since 2011 when price rises triggered waves of protests, especially in the Middle East.

The global economy is entering the fastest stage of the 2021 recovery. After a lackluster start, growth sped into the end of the second quarter. With reopening under way, the third quarter should be substantially stronger and momentum largely maintained through year-end. That puts global growth at 6.9% for 2021 as a whole, slowing to 4.9% in 2022.