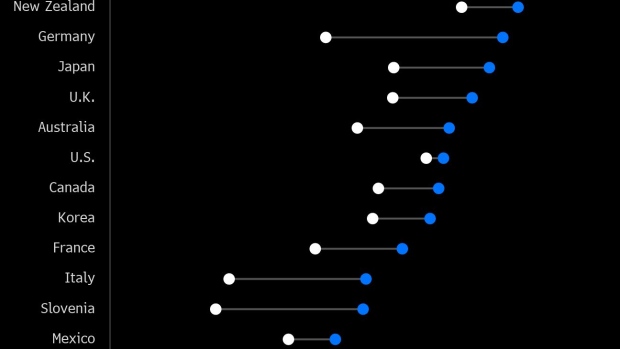 (Bloomberg) -- The Federal Reserve pulled forward its expected date for when central bankers will start to raise the U.S. benchmark interest rate, reflecting optimism about the labor market and heightened inflation concerns.

Growth expectations are improving for Italy and the rest of Europe amid reopenings and more vaccinations against Covid-19. In China, the economic recovery is stabilizing, with a shift toward consumer-driven demand.

Fed officials sped up their expected pace of policy tightening amid optimism about the labor market and heightened concerns for inflation. Their forecasts show they anticipate two interest-rate increases by the end of 2023 -- sooner than many thought -- and they upgraded estimates for inflation for the next three years.

A delay to the removal of all restrictions on public life in England is unlikely to blow the rapid recovery off course this year, with Bloomberg Economic predicting that the U.K. economy will still regain its pre-virus level in the final quarter of 2021.

Italy’s economy could grow well above 5% this year -- faster than the latest predictions by the central bank, the OECD and European Commission -- according to two government officials.

China’s economy steadied for a second month, a sign that the post-pandemic recovery is in a more stable phase and that growth is slowly rebalancing toward the consumer.

The People’s Bank of China’s may have made stealth cash injections: its claims on other depository corporations, a gauge measuring the central bank’s cash injections, jumped by 470 billion yuan ($73 billion) in May, the most in six months.

Uganda’s central bank surprised with a benchmark interest-rate cut to the lowest level ever, saying economic recovery still requires monetary policy support. It’s the third institution in Africa after Ghana and the Democratic Republic of Congo to have reduced borrowing costs this year.

Policy missteps, entrenched corruption and an over-reliance on crude oil mean Nigeria -- which makes up a quarter of Africa’s economy -- risks becoming the continent’s biggest problem.

Governments and companies are beginning to take note of the need to understand the economic implications of menopause. Symptoms start in women between the ages of 45 and 55, who account for 11% of the workforce in the Group of Seven industrial nations.

Real estate prices around the world are flashing the kind of bubble warnings that haven’t been seen since the run up to the 2008 financial crisis, according to Bloomberg Economics. New Zealand, Canada and Sweden rank as the world’s frothiest housing markets. The U.K. and the U.S. are also near the top of the risk rankings.