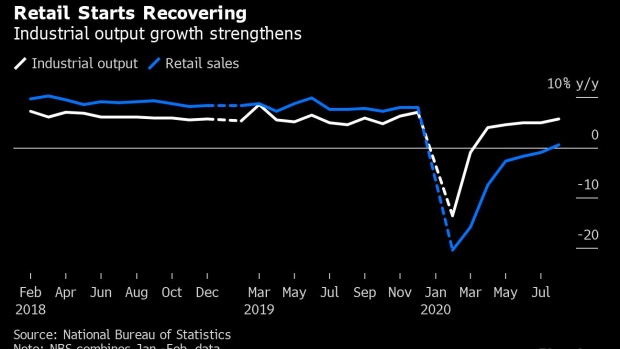 (Bloomberg) -- The Federal Reserve signaled it will keep its benchmark interest rate near zero through 2023 to help the world’s largest economy recover from the coronavirus pandemic.

Cheap borrowing costs are fueling demand for U.S. housing and leaving builders brimming with optimism in the process. In China, retail sales and industrial output are on the mend, while in the U.K., the virus-related shutdowns are having a large negative impact on youth employment.

The global economic slump won’t be as sharp as previously feared this year, though the recovery is losing pace and will need support from governments and central banks for some time yet, according to the OECD.

The Federal Reserve’s so-called dot plot, which the central bank uses to signal its outlook for the path of interest rates, shows that officials expect no change in policy this year and borrowing costs near zero through 2023.

Homebuilder optimism rose to a record in September, with low mortgage rates driving a housing boom that has boosted the pandemic economy, National Association of Home Builders data show.

The U.K.’s lockdown hit young workers particularly hard, with employment in the 16-24 age category falling by 156,000. That may reflect the share of young workers in hotels, restaurants and bars, a sector devastated by the pandemic.

China’s economic recovery from Covid-19 accelerated, spurred by a rebound in consumption as virus restrictions eased and larger-than-expected gains in industrial output. Retail sales rose for the first time this year in August, by 0.5% from a year earlier, while industrial production expanded 5.6%, against a forecast of 5.1%.

Scoring 75 emerging-market and frontier economies, Bloomberg Economics finds that Asia leads in getting closer to pre-outbreak norms, with some countries in Africa and Eastern Europe also outperforming. Latin America is still struggling to contain the pandemic, with 18 of the bottom 25 in the ranking in Latin America or the Caribbean.

Saudi Arabia’s crude exports dropped to the lowest since at least 2016 in the second quarter as it led a campaign alongside Russia to curb oil production following a coronavirus-induced price crash. While the effort yielded a stark turnaround in prices in May and June, Saudi revenue from oil sales still plunged almost 62% in the three-month period from a year earlier.

South Africa is among the countries with the highest percentage of smokers globally, with almost one in every three adults lighting up. So when the government banned cigarette sales for about five months of the nation’s Covid-19 lockdown, some 90% found a workaround.