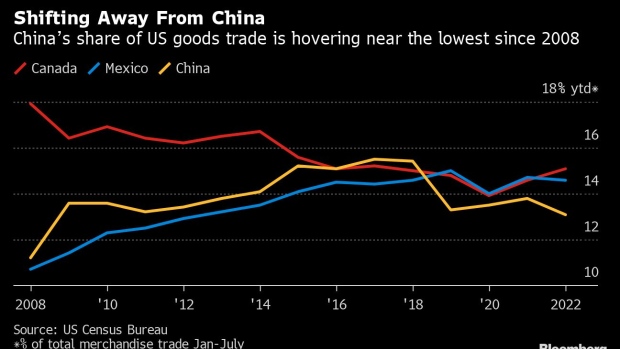 (Bloomberg) -- The International Monetary Fund cut its global growth forecast and stressed that economies are becoming increasingly vulnerable to monetary policy missteps that compound headwinds from the war in Ukraine and sluggishness in China.

A widely followed gauge of underlying consumer prices in the US accelerated to a 40-year high. Persistent inflation is raising prospects the Federal Reserve will adhere to a stout monetary policy strategy, fueling a surge in the dollar that has economic and financial repercussions for the rest of the world.

The IMF warned of a worsening outlook for the global economy, cutting its forecast for global growth next year to 2.7%, from 2.9% seen in July, adding that it sees a 25% probability that growth will slow to less than 2%. The risk of policy miscalculation has risen sharply as growth remains fragile and markets show signs of stress, the IMF said in its World Economic Outlook. About one-third of the global economy risks contracting next year, with the US, European Union and China all continuing to stall.

Several years of supply-chain instability are pushing an increasing number of US retail companies to shift some production from China to North America. The unrelenting problems have convinced some executives that it’s time to rethink the corporate playbook of the past several decades.

A closely watched measure of consumer prices rose by more than forecast to a 40-year high in September, pressuring the Fed to raise interest rates even more aggressively to stamp out persistent inflation.

Europe’s energy crunch will likely trigger a contraction in the German economy next year for only the third time since the financial crisis, according to updated government forecasts. Gross domestic product is set to shrink by 0.4% in 2023 as soaring power costs crimp industrial output and dampen consumer spending, slashing a forecast of 2.5% expansion made at the end of April.

Inflation in Norway and Denmark unexpectedly surged to new multi-decade highs last month, dispelling expectations that price growth in the Nordic region has peaked and raising the risk of deeper recessions. Denmark’s inflation rate rose to 10% in September, reaching double digits for the first time in four decades, while price growth in Norway accelerated to 6.9% -- the fastest pace in 34 years.

Bloomberg Economics has sketched out four scenarios for China’s economy over the decades ahead, with a base case of 4.6% growth on average over the next decade. Their model suggests a growth rate above 5% over that time period — as predicted pre-pandemic — is now out of reach, due to the lasting impact of Covid Zero policies, a faster decline in fertility than previously expected and lower investment due to a gradually shrinking real estate sector.

China used a controversial tool to inject funds into policy banks for the first time in more than two years, as Beijing increasingly relies on the semi-official lenders to support the economy while monetary easing is constrained by rising global interest rates. The relaunch of the tool suggests the government is seeking every possible way to expand the funding source for policy banks.

The Bank of Korea raised its seven-day repurchase rate a half-percentage point to a 10-year high of 3%. Two board members of the South Korean central bank voted against the decision as concerns over slowing growth and a downturn in the property market fueled renewed caution over the central bank’s policy trajectory.

Brazil’s consumer prices fell for the third consecutive month, burnishing President Jair Bolsonaro’s economic credentials ahead of the second round of presidential elections on Oct. 30. Official data showed the monthly inflation rate fell 0.29% in September, the largest drop for the month since the start of the data series in 1980.